Why Do Most Dogs Scratch Their Beds?

Pet behavior such as the fact that dogs scratch their beds is often amusing; although, there's usually a biological explanation behind these types of quirks and this is no exception. 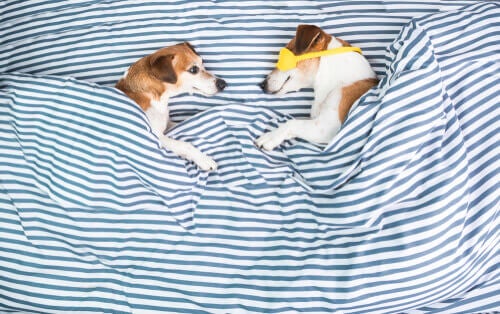 Pet behavior never ceases to amaze us; for example, the way dogs scratch their beds. As amusing as it may seem, such conduct is encoded in their DNA and are as old as the species itself. It goes all the way back to when wild dogs dug on the ground for the purpose of making a sleeping hole.

Their goal was to rest peacefully and feel protected in a comfortable place. These days, domestic dogs no longer need to build such spaces to take their naps.

However, they still have a tendency to scratch their sleeping area and this inherited behavior is sort of vestigial now.

Why do dogs scratch their beds?

Dogs have their own bedtime rituals, the same as humans. This is the main reason why it takes them so long to lie down to sleep.

First of all, they must make their bed properly and they do so by following some steps.

As we mentioned above, domestic dogs are evolutionarily-related to coyotes, wolves, and foxes. All these wild animals dig burrows for raising their cubs.

Even when a dog is in a comfortable and protected environment, they still have to scratch their sleeping area. To a large extent, softening or changing the shape of the mattress is instinctive.

Many inherited behaviors don’t have a clear meaning in city life, but all of them are useful if you think about them in a natural context. Nothing comes by chance when it comes to animal behavior.

Just like their wild relatives scratch and dig an area to fit their bodies, so do dogs. They do so to make their sleeping area as comfortable as possible.

Dogs have other curious rituals to soften their sleeping zone. A common one is to walk in circles several times before going down. Some of them also push it with their head.

In addition, there sometimes perform nesting tasks, such as collecting leaves or moss. Then, they bring them to their bedding. This might be an indication that they need an extra blanket or a mattress.

Dogs scratch their beds to mark the territory

One of the characteristic features of dogs is that they’re highly territorial. It’s for this reason that they have a tendency to carry out marking actions.

Thus, they claim all those spaces they consider theirs. The most common form of marking is by peeing on something, although they may also scratch the bed or rub themselves against it.

The reason behind this behavior is that dogs have sweat glands on their paws. They release a scent through them for the purpose of marking their sleeping area.

Another explanation for why a dog may scratch the sleeping area could be temperature control. This is a lot more common if the animal sleeps outside the house.

Some dogs prefer to dig their own sleeping holes, even if they have their own bed. The goal behind this is to try and adapt to the climate, either to warm up or cool down.

Dogs may scratch their beds to get our attention

There are times when the dog knows you’re paying attention to them when they scratch their sleeping area and might take it as a reward. Mainly because they think they’re pleasing you.

Thus, they’ll tend to repeat it when they want your attention. It isn’t serious if they do it once in a while. However, you must wonder if there’s something’s wrong and what you should do about it if it becomes a habit.

Scratching a sleeping area isn’t necessarily negative behavior. However, you must take a few things into account:

Ultimately, dogs scratch the sleeping area due to instinctive behavior, just like their non-domestic ancestors.

However, even though it’s normal behavior you must see if it’s accompanied by other suspicious forms of behavior. Consult a vet if this is the case, they should be able to evaluate the animal and indicate the best course of action according to their needs.

How to Choose the Best Dog Bed
Any dog owner knows that you need a dog bed so your furball can sleep safe and sound! We'll give you tips for choosing the best one. Read more »
Link copied!
Interesting Articles
Tips and Curiosities
Why Your Dog Licks the Floor