Phylogeny studies the origin, formation and general evolutionary development of the species. Thanks to it, we know our most distant relatives. 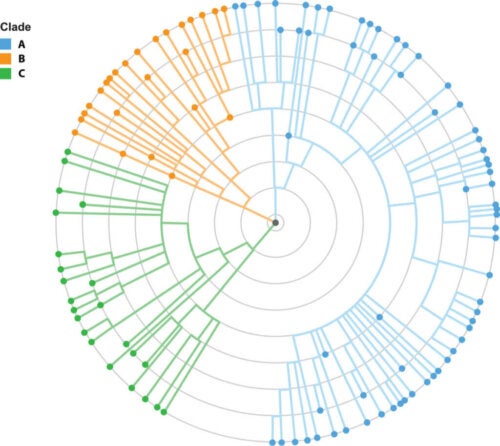 Surely, you’ve made a family tree at school at some point. While trying to draw it, many of us have researched where our ancestors came from. Or, for example, why we have brown eyes if our grandfather had blue eyes. All this leads us to the question that concerns us today: what is phylogeny?

Or, in other words, what happens when, instead of making a family tree, scientists try to decipher the evolutionary path of a species? What scientific discipline should we consider if we want to find the first living being that inhabited the planet?

Next, we’ll tell you what family trees, blue eyes, and Mendel’s peas have to do with each other. Read on to find out.

Phylogeny is the branch of evolutionary biology that studies the origin of life, that is, the relationship of kinship between species throughout evolution. The goal is to build a phylogenetic tree to indicate who are the ancestors of a particular species. The word was coined by the German naturalist and philosopher Ernst Haeckel, at the end of the 19th century.

As we know, evolution is such a slow process that an individual doesn’t live long enough to see it with their own eyes. Today, it’s commonly claimed that birds are descendants of dinosaurs, but how was this conclusion reached? There are two main methods to determine the phylogeny of a species:

How many times have we heard that we come from monkeys? The human being, the first to ask what phylogeny is and how to apply it, took one of their own species as one of the main subjects. However, it seems that no matter how similar we are to great apes, our origin isn’t the same.

We are yet to discover the answer to the question about our origin: when did humans start being human? Chris Stringer, one of the most renowned anthropologists in the United Kingdom, has dedicated his career to trying to answer this question.

Stringer is one of the most ardent defenders of the theory that the human species as we know it originated on the African continent, migrating to Europe and Asia, and gradually replacing the hominids living in those regions, such as Homo erectus and Homo neanderthalensis.

There are three pieces of evidence in favor of this hypothesis:

However, the ancient theory that Homo erectus and Homo neanderthalensis were banished from their lands lost strength upon finding evidence of crosses between the species. The most recent DNA studies show that we do indeed inherit characteristics from these two species.

The tree of life

Even if phylogeny as such was born with Haeckel, Charles Darwin was the one to introduce the concept of evolution with his studies on adaptive changes in the morphology of different species.

The ultimate goal of phylogeny is, therefore, to complete the tree of life, the phylogenetic path of all species present on planet Earth. Its root would be the original species we all come from, and the final branches, the current species.

Who, then, occupies the place of the last universal common ancestor? Known as LUCA — Last Universal Common Ancestor – this position is held by cyanobacteria. Other theories say that, being a kingdom in itself —neither animal nor plant— the oldest creature is the sea sponge, with more than 750,000 years on Earth.

All this leaves us with a clear question: who will be the next LUCA? Will we ever reach the roots of our existence? We can only hope to live long enough to find out.

Is It Possible to Recover Extinct Species?
Humans try to recover extinct species because we consider it a cruel fate. However, this has been pretty common since the beginning of time. Read more »