What's the Right Diet for Goats to Eat?

Goats are ruminating animals, meaning they have four compartments in their stomachs. What they eat varies depending on the type of production for which they're destined. Today, we'll tell you more about the right diet for goats. 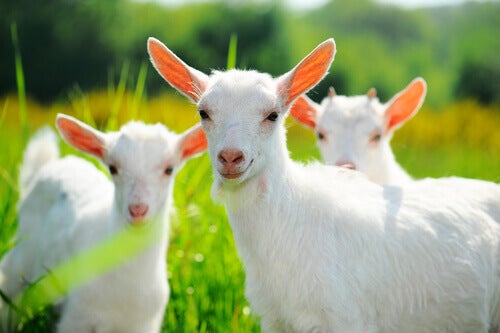 Goats are mammals that are raised principally for the production of milk and other derivatives. When it comes to the right diet for goats, the most important objective is to produce quality products that are suitable for human consumption.

The breeding of goats dates back for centuries and has taken place in various parts of the world. These days, there are many dairy products that come from goats, including cheese, yogurts, light and healthy milks, and more.

Given the current trend in society of creating healthier and more organic foods, goat’s milk has become very popular. The difference between goat’s milk and cow’s milk is that the former is easier to digest. What’s more, it’s tolerable for those who are intolerant toward or allergic to cow’s milk.

The breeding of goats

Goats belong to the Caprinae subfamily and the Bovidae family. Since they possess four compartments in their stomach, they’re considered ruminating animals. In other words, their food goes through diverse fermentation processes before the body converts it into waste. In their natural habitat, goats graze and eat the seeds of grains like corn. What’s more, fruits from trees and bushes also make up part of a goat’s diet.

These animals tend to live in mountainous regions where their routine consists of long walks in order to graze. What’s more, they’re independent and solitary. One of their principal qualities is that they have a good memory when it comes to finding their way home.

As for their physical characteristics, they have a fibrous build. Therefore, their meat is not as popular as that of other bovine species. However, they are one of the greatest producers of milk among their kind. In fact, they are able to produce three times their weight in milk.

The right diet for goats

The right diet for goats is one which balances the necessary nutrients for their overall development. This means satisfying the principle needs, including body function, digestive function, and respiratory function. In the same way, it consists of providing the right nutrients in order to reach desired production levels.

The way to feed goats varies according to the purpose or their breeding. In other words, it depends on whether they are bred for their meat or their milk. In both cases, the foundation of their diet is the same–grass, hay, and fruits. However, dairy goats need an extra dose of cereals.

Commercial feeds reinforce this dose of cereals that milk goats need. Most of these feeds contain grains and trace elements that stimulate milk production. Wheat, soy flour, and oats are also complementary foods that are beneficial to the goats’ growth.

How to correctly feed goats

Although goats are used to grazing, it’s important to supervise the food that young goats eat. That’s because intoxication can occur if they eat foods that are harmful to their bodies. For example, poisonous bushes, tomato leaves, and ornamental plants.

The introduction of complementary foods into a goat’s diet should take place gradually and with caution. It’s important to remember that an excess of cereals can lead to digestive and growth problems. Therefore, breeders should carefully control the amount of cereal that goats eat on a daily basis.

Water and hay should make up the foundation of a goat’s diet. This is especially true in the case of pregnant goats, who must also take in between two and five cups of grain per day. Goat kids can eat between one and two cups of grain each day until they reach the age of 14 months.

Further recommendations regarding the breeding of goats

The breeding of goats is one of the most common practices when it comes to keeping livestock. That’s because they don’t require great demands when it comes to space, care, and feeding. However, it’s always important to observe their behavior, since they can devastate vegetation, given their desire to find food. Below are several recommendations regarding the care of goats.

Caring for Goats: 4 Things You Need to Know
Caring for goats can be great fun, but iit's important to know how to keep them happy and healthy. Here are the 4 main things you need to know. Read more »

Animals
What a Dog Feels When it Looks at You

Any dog owner will agree that establishing eye contact with their dog is more than just a sensory experience. It’s…