Why You Shouldn't Have a Raccoon as a Pet

It's a wild animal, but actually the reasons for adopting or not adopting a specimen could be the same. 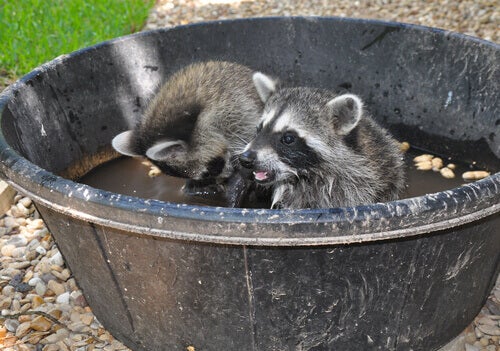 Adopting pets that are less “conventional” than a dog or a cat is trendy. Many people are embarking on the adventure of adopting a raccoon as a pet. Is this an idea you’re considering? Well, here are some reasons why you shouldn’t do it, or maybe you should…

Reasons not to have a raccoon as a pet

Having a raccoon as a pet can be a lot of fun for many reasons. They’re not usually domesticated, so everything they see at home is new to them and this can lead to hilarious situations.

In addition, they have a tendency to imitate the behavior they see, whether from people or other pets. This is the case of Pumpkin, an Instagram star raccoon that thinks it’s a dog, and who we’ve featured before on My Animals. His mischief actions have become infamous on social networks.

They create their own exercise routines

If you’re too lazy to take your pet out for walks and help it exercise, don’t worry, because this won’t be a problem with a raccoon. They have a very funny and slick habit: jumping. It’s their way of trying to reach for what they want, to greet you, to ask for something… They use it for everything!

Exercise won’t be something to worry about if you have a raccoon as a pet.

Bathing them will be a unique experience

One of the times when these jumps that they like so much take on a whole new meaning is at bathtime. Whether they do it because they hate water or because they love it, is yet to be discovered. If you want to discover the reason why they spin and twirl like crazy, give your new pet a bath and you’ll see that you won’t be able to help but laugh.

Do you need to clean, change a car wheel or tighten a screw? Don’t worry, your raccoon will be there to help you. Although how much of a help it’ll be we can’t say…

Why you shouldn’t have a raccoon as a pet: they don’t share their food

Forget about sitting down with your pet to watch a movie and share your popcorn. If your raccoon sees you with a bowl of food, at the slightest opportunity it’ll take it away to eat it alone. So, you’ll have to say bye bye to your popcorn.

Just as magpies love shiny things, raccoons love hats. We don’t know where this obsession comes from, but, as soon as they see one, they’ll grab it without hesitation. And what’s more, they know what area of the body it’s for!

They’re always up to mischief

They love annoying others, it could be you, another family member or any other pet you have at home. Of course, even if they enjoy doing it, they usually stop when they know they’ve reached the limit. And the best thing is that they apologize later.

If there’s one thing that characterizes raccoons, it’s their insatiable appetite. If at some point you forget to feed them or you give them less than what they’re entitled to, don’t worry. They’ll manage to open the fridge, steal food from other pets in the house or even from the neighbor’s pets if necessary.

Despite being wild animals, raccoons are tremendously romantic and affectionate once they’ve settled into living with a family. Chances are you’ll have to shake them off at every turn.

They love to knead with their hands just like cats do, only in this case they’ll knead any part of your body, including your face. It can be really… sweet!

Finally, sometimes they seem to think that they really dogs or cats and often take risks that they shouldn’t. So, they won’t think twice about jumping from one side to the other if they need to get somewhere, or nor if they see a wall in front of them. The problem is the fall…

As you can see, there are thousands of reasons you shouldn’t keep a raccoon as a pet…or maybe these very reasons have convinced you to get one! It’s up to you!

Discover Why There Are Raccoons in Europe
Why are raccoons in Europe? Originally from the American continent, these mammals are expanding in Europe for a number of reasons. Read more »
Link copied!
Interesting Articles
Wild Animals
The Fauna of the Himalayan Mountains