5 Animals that Live in Grasslands

In this article, you’ll discover five animals that live in grasslands, typical of four-season climates with warm temperatures. 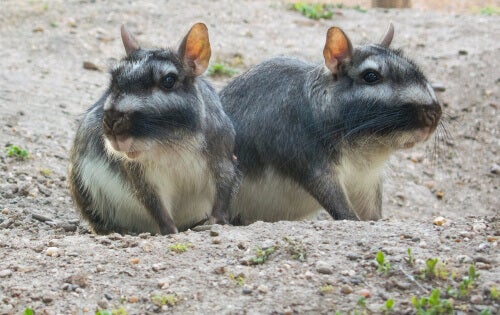 Also known as savannas, meadows, or scrublands, grasslands are a temperate and semi-arid terrestrial biome that consists of grass or shrubs. Animals that live in grasslands mainly feed on plants and adapt to sudden temperature changes between winter and summer. Learn more about them in this article!

Examples of animals that live in grasslands

There are five main temperate grassland, savanna, and shrubland areas around the world: the savannas of southern Australia, the steppes of Asia, the velds of South Africa, the pampas of South America, and the great prairies of North America. Some of the animals that live in grasslands are the following:

This is a rodent that can reach up to 23 inches long. It has abundant gray and white hair, long whiskers, and small ears. Although its legs are short, its strong nails allow it to dig its own burrow. It can weigh up to 11 pounds and its tail comes off easily, meaning that it can easily escape traps.

The southern viscacha, which is featured on the main image of this article, lives in groups of up to 50 specimens in burrows that they dig on firm ground. It feeds on vegetables and crops. It reproduces in the autumn, averaging two cubs per litter.

This placental mammal, of the Chlamyphoridae and Dasypodidae families, has a characteristic leathery shell that even covers its face. This kind of “armor” consists of dermal bone plates and serves as protection.

This animal has nocturnal habits. It digs with its powerful claws and can be insectivorous or omnivorous, depending on whether it lives in the grasslands of Central or South America.

This animal, typical of America (from Canada to Colombia), is another of the animals that live in grasslands. Although it’s solitary, it can gather in packs. The coyote is about 23 inches tall and weighs a maximum of 55 pounds, meaning it’s smaller than its older relative, the gray wolf. It’s easier to hear than see, as its high-pitched, howl-like whine or bark is quite distinctive.

Its fur can be gray or cinnamon, sometimes with reddish tints. Its long pointed ears and long snout with a black nose are striking. This animal mates for life. Each season, the female gives birth to four cubs; both parents take care of the young.

This small bird is well known in the shrublands of South America, especially in Argentina, Uruguay, and Chile. The chimango caracara is a sedentary bird that adapts very well to urban environments or low vegetation terrain. It feeds on carrion and bones.

The females are bigger than males. Their plumage, which is pale in females, also distinguishes them. This bird builds its nests on grass and lays up to three eggs, which it incubates for a month. At five weeks, the chicks leave the nest.

The last of the animals that live in grasslands in our listtoday is one of the biggest birds in the world. As it can’t fly, it runs at high speeds with its long, powerful legs.

The rhea is polygamous, meaning that a male mates with several females. The male is responsible for incubating the eggs in nests it makes in open terrain and raising the chicks until they leave the nest.

This bird feeds on seeds, grass, fruits, reptiles, insects, and snakes. It’s known for its voracity, as its stomach produces very powerful enzymes. Thus, it can easily consume a lot of food in one sitting.

Why Do Dogs Love to Roll Around in the Grass?
Have you ever asked yourself why dogs love to roll around the grass? Continue reading to discover the reasons behind this quirky behavior. Read more »
Link copied!
Interesting Articles
Amphibians
The Differences Between Toads and Frogs