The Typology and Behavior of the Coyote

They are animals with an enormous capacity for adaptation, and can live in deserts, forests, or mountainous areas, in cold or hot weather. Discover more about the typology and behavior of the coyote. 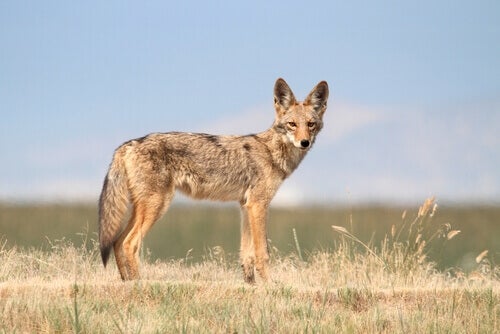 The coyote is a carnivorous mammal that belongs to the canine family, which can be confused with a wolf or a wild dog. To distinguish it well, you need to look at the slenderness of its body and its intense yellow eyes. Its color and size can vary greatly, as there are at least 16 different varieties. This animal is present in the tales and legends of the Native North Americans and always appears as a very cunning and dynamic animal. Below, we’ll see some elements to better understand the typology and behavior of the coyote.

The coyote lives mainly in North and Central America, but also in some regions of South America. Some live in mountainous regions and others in the plains or even in hot desert areas.

It has a great capacity for adaptation, which is why it’s extended its habitat in such a surprising way. Coyotes can live in cold or hot areas, in forests, deserts, or mountains. What’s more, they’ve adapted to urban areas, and have even colonized cities such as Los Angeles.

Most specimens have gray or brown fur but may have yellow or white spots along the body. Those living in colder areas have longer, coarser coats; those found in warmer areas have shorter, less dense coats.

Coyotes can measure approximately 24 inches in height and weigh an average of 33 to 44 pounds. Although they’re healthy and strong, their appearance is always scrawny.


They have long, strong legs and can reach speeds of up to 40 mph. They rely only on their toes to move; their snout’s very long, and they have a highly developed sense of smell and keen eyesight.

These characteristics make them excellent hunters. Their sense of smell is so well developed that they can even find animals hidden under the snow. They’re able to hunt rodents and leave them alive to teach their young how to hunt.

The coyote’s digestive system is carnivorous, but it can eat practically anything. Its diet is opportunistic and adapts easily to whatever it finds in the environment; it can even subsist by eating garbage.

If it gets the chance, it hunts and consumes small and large mammals like rabbits, rodents, sheep, cattle, deer, etc. It also feeds on birds and reptiles such as chickens, snakes, or fish; in cases of necessity, and when there isn’t anything else around, it eats insects, fruits, and vegetables.

The behavior of the coyote

As for the behavior of the coyote, these animals mark their territory through their urine, which has a very strong odor. In general, they live and hunt alone or in monogamous pairs; sometimes they mate for life.

They may live in small packs, with a maximum of six members; in such cases, leadership disputes are often very aggressive and some members are even expelled or leave the group. They communicate by means of characteristic, very high-pitched howls.


The life expectancy of this wild canine is 14 years. The coyote population has grown a lot in recent times, in spite of human efforts to wipe them out. This is because they attack farms and backyards, affecting livestock and crops.

Male coyotes have a process of conquering females that lasts between two and three months. If a female reciprocates, they mate, usually in February; it’s always the female who makes the decision to mate.

The female then begins a gestation period of approximately 60 days. When spring arrives, she retires to her den and gives birth to an average of six cubs (up to 12).

The cubs are fed by the mother and father, and also by the older siblings who remain in the pack. After ten weeks, they go out into the outside world for the first time and begin to socialize.

The adults are in charge of training the young for hunting, and, approximately nine months later, they’re ready to become independent; they reach sexual maturity at one year of age. Some individuals form their own family near their parents’ home, while others choose to stay with the pack.

The African Wild Dog
An unknown species found in Africa, the African wild dog is known for the unique color of its coat and the loyality to its pack. Read more »
Link copied!
Interesting Articles
Mammals
Types and Characteristics of Asian Elephants