Full of mammals and birds, some of the animals that make up South Africa's wildlife include wild canids and colorful chickens. Read the following article to discover more! 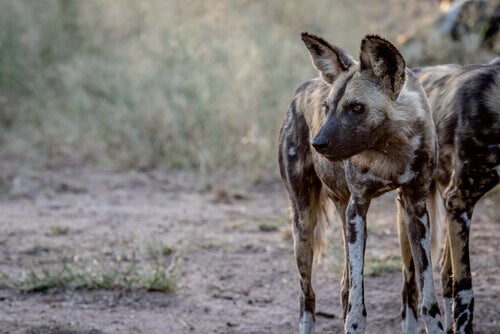 With a predominantly grassland ecosystem, and the Kruger National Park as the main animal and plant reserve, South Africa’s wildlife is truly fascinating. In this article, we’ll tell you about some of the country’s most characteristic species.

Beyond “the big five“, there are dozens of other species that inhabit this portion of the continent. Most of them can be found in the Kruger National Park and the most widely known are the following:

This carnivorous mammal (Lycaon pictus) – which appears in this article’s title photo – is known as the African wild dog, Cape hunting dog, or painted dog. It’s endemic to all of Africa, although more present in South Africa due to its ecosystem.

Its coat consists of three colors, in splotches of brown, black and white; no two specimens have the same pattern of spots. In addition, its large, rounded ears are always upright.

These wild dogs live and hunt in herds, feeding on impalas and other medium-sized ungulates. They have a very effective technique for obtaining prey: they relieve each other to avoid fatigue. Their social system is the matriarchy, that is, a female leads them.

The helmeted guinea fowl is a bird of the hen family that originated in Africa, although it was introduced to other latitudes, such as France. It prefers open, warm areas and can ‘mingle’ with domestic chickens.


This bird one of the most outstanding representatives of the South African fauna, and measures about 20 inches. It attracts attention with its bluish neck, its black and grey feathers that look like scales, and the brown crest on its head. Unlike other species in the genus, the guinea fowl doesn’t have sexual dimorphism.

The ‘common’ zebra is another species within South Africa’s wildlife that we can highlight. It lives in savannahs and plains and, because of hunting and the reduction of its natural habitat, the population is increasingly reduced. It’s common to see it in reserves and national parks on the continent.


Famous for its black and white striped body (no two zebras share the same pattern), the zebra can measure 5 feet and weigh 840 pounds. It’s a very sociable animal, which lives in small groups of a male and several females with their young.

At night, they take turns standing guard to avoid predators. They like to eat short grass and, from time to time, they feed on stems and leaves.

This bird is similar to the stork in size and appearance. It has a particular coloring in its feathers (white and black) and long beak (red and black). It lives in rivers, wetlands, freshwater lagoons and marshes, near meadows, and open areas.


During the day it has to ruffle its feathers and separate them from its body to reduce body temperature. It also fills its beak with water to cool down and ‘bathe’ its young or eggs. Also, it spends a lot of time with its legs in the water looking for food, catching fish with its expert beak.

The great kudu is another of the species of South African fauna that we can highlight. This mammal from the bovine family is large and males’ antlers are remarkable. They look like a ‘spiral’ and can measure up to 3 feet.

The kudu inhabits the bush in separate groups of males and females (the latter with their young). It feeds on leaves and tender branches, has nocturnal habits and, although it’s slow-walking, can jump up to two meters when it has to escape the claws or fangs of predators.

The Most Important African Dog Breeds
There's no denying that when we think about Africa, we tend to imagine all sorts of exotic animals. But there are actually a number of African dog breeds. Read more »
Link copied!
Interesting Articles
Invertebrates
What Are the Most Dangerous Stings?