All About the Behavior of the Hyena

These scavengers are considered some of the biggest opportunists in the African savannah, and they feed on everything they find in their path. In fact, they can even ingest the feces of other animals. Discover more about the behavior of the hyena in the following article. 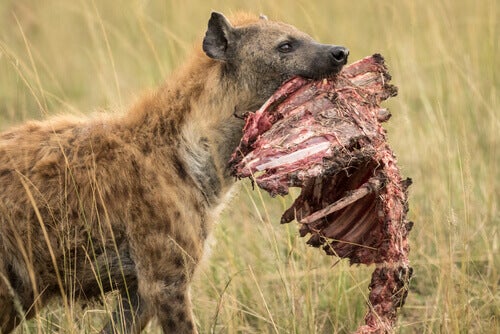 You probably already know that it laughs when it catches it’s prey and that it tends to smell very bad. Perhaps you’ve also learned that it eats meat or carrion and that it’s a typical African wild animal. But there’s probably a lot more about the habits and behavior of the hyena that you’ve yet to discover. In this article, we’ll tell you more.

Bold and dangerous: the behavior of the hyena

Since ancient times, hyenas and humans have shared different kinds of relationships. On the one hand, ancient Egyptians domesticated this African carnivore. On the other hand, we know that hyenas have come to eat humans, as they don’t fear us at all.

Hyenas exhibit cannibalistic behavior, meaning they’re capable of eating specimens of their own species. What’s more, females are very similar to the males in terms of size, and in terms of their genitals.

Contrary to popular belief, these aren’t hermaphroditic animals. However, females have had to evolve to appear more dangerous and wild when a male tries to eat their young.

This is a polygamous animal that makes brief copulations in order to mate. The gestation period is approximately four months and, after the female gives birth, she must wait up to three years to become fertile again.

Each season, a female can have up to four pups, which she feeds exclusively with her own milk for up to five months. After that, they can already consume meat. Just the same, they continue nursing until they’re one and a half years old.

Little by little, the young hyenas go out with their mothers on hunting raids. But, until they can hunt for themselves, they’re always in the care of an adult.

Hyenas live in grasslands, savannahs, forests, mountains, and sub-deserts. They organize themselves into groups or families, since all the members are related. This allows them to defend themselves from other clans or intruders that arrive on their territory.

They’re very social animals that can communicate with each other by means of signals, postures, or specific calls. In this way, just by observing each other, they know the intentions of the other. For example, a straight tail is synonymous with attack while a tail between the legs is a sign of fear. What’s more, if a hyena puts its tail up and over its back, it means it’s full of energy.

They also communicate with their companions through vocalizations such as screams, wails, howls, and their famous ‘laugh’. Their laugh lets others know that they’ve found a good source of food, and it’s audible over a mile away!

They usually live in dens. These are raised mounds with a hole or depression in the center whose entrance is connected by underground tunnels. On the outside of the ‘circle’ are the males that protect the females and young that are living inside.

These ‘bathrooms’ serve to deposit their excrement, which are a very visible chalk white due to the amount of bones they consume daily. They don’t raise their legs to urinate like dogs, but they do groom with their tongues like cats do. However, hyenas, unlike cats, never wash their faces.

Their diet consists of everything they find in their path: Carrion, plant material, animals such as cattle, wildebeests, or hares, and even excrement from other species. Hyenas are very intelligent when it comes to hunting and providing themselves with food. They’re known as the greatest ‘opportunists’ of the African savannah.

Their strong jaws and digestive tract allow them to process even the skin, viscera, and bones of their prey. The only things they don’t consume are the hooves, hair, and horns.

The African Wild Dog
An unknown species found in Africa, the African wild dog is known for the unique color of its coat and the loyality to its pack. Read more »
Link copied!
Interesting Articles
Birds
The Effects of Climate Change and Plastic Pollution on Seabirds