All About the Curious Spectacled Bear

Characterized by the fur on its face, the spectacled bear doesn’t have specific winter habits, such as dormancy or hibernation, due to the climate and the stability of food supply. 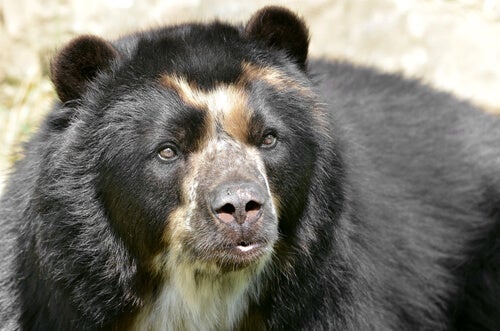 The spectacled bear lives in South America. As its name suggests, the light coloring on its face resembles eyeglasses. In this article, we’ll you all about the curious spectacled bear. Read on to learn more about this interesting animal!

The characteristics and habitat of the spectacled bear

If we compare it to other members of the Ursidae family, the spectacled bear is medium in size. It’s just under six feet tall and weighs approximately 220 pounds (males are bigger than females). The color of its body is homogeneous, mostly black and with brown or whitish spots on its face and neck.

It has a short, light-colored snout. Its legs have five long claws that allow it to climb trees. Without a doubt, what most characterizes this species are the spots around its eyes. In fact, it owes its name to them.

This mammal has a big head in comparison to its body, just like the panda. It lives in humid forests, moors, and semi-arid areas between 2600 and 12400 feet above sea level. It inhabits the following Latin American countries: Venezuela, Ecuador, Peru, Colombia, and Bolivia, specifically in the surroundings of the Andes Mountains.

Diet, behavior, and reproduction of the spectacled bear

Although its diet is considered omnivorous (like other bears, except the polar bear, which is 100% carnivorous), in practice, it’s mostly vegetarian, since it feeds on fruits, berries, roots, mushrooms, tree barks, bulbs, sugar cane, corn, and honey. It only eats insects, fish, reptiles, or bird chicks if it absolutely needs to.

The spectacled bear is solitary and diurnal, it always moves in its own area (which it marks with its pheromones and by scratching trees), and it can spend several hours climbing trees, where it gets most of its food. At night, it finds shelter in the highest branches.

One of the differences with other plantigrades of the family is that it doesn’t have specific winter habits, such as hibernation or dormancy. It also resembles the panda in this, due to the climate where it lives and the stability of food supply throughout the year.

Regarding their reproduction, both sexes reach sexual maturity at four years of age. The gestation period lasts several months and the females usually give birth to two cubs per litter in a kind of nest they build themselves.

Mothers are very protective of their cubs, as they can be attacked by various predators, such as pumas. They stay by their side as they learn all the survival techniques. The cubs leave the burrow at around age two.

There are different projects to protect the spectacled bear, as its population has been drastically decreasing in recent times. This bear is hunted for sport or for its claws, which are believed to have medicinal properties. Likewise, it’s very difficult to see or find this animal, as it’s quite shy and doesn’t interact with people.

In short, we hope you enjoyed learning about this magnificent animal.

How Do Bears Care for Their Cubs?
Brown bear females are loyal and attentive mothers who care for their cubs for more than a year before their young are emancipated. Read more »
Link copied!
Interesting Articles
Wild Animals
5 Animals that Live in Grasslands