Discover the 5 Smallest Frogs in the World

In addition to being the tiniest subspecies of these amphibians, these specimens attract attention for their colorful bodies. Learn more about the smallest frogs on the planet! 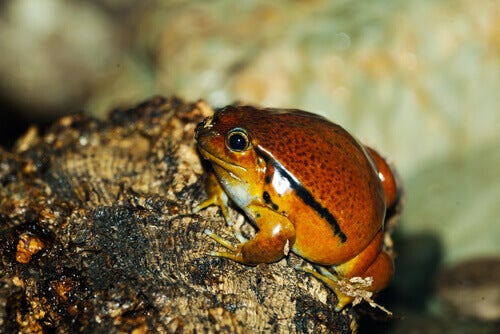 So far, the world’s smallest frogs have been found on the island of Papua New Guinea, north of Australia… and they’re incredibly tiny! Some of them even fit on a penny coin. Get to know all about them in this article.

Which are the smallest frogs in the world?

In nature, we can find giant species and others that are so tiny that they’re very difficult to spot. Even in the case of the world’s smallest frogs, whose bodies are so colorful, researchers have a hard time finding them among vegetation. Some of the smallest frogs in the animal kingdom are:

This anuran amphibian – which appears in this article’s cover photo – belongs to the Microhylidae family, i.e., the smallest frogs in existence. At only 3/4 of an inch in length, it’s the smallest vertebrate known to exist.

It was found in 2009 during an expedition to the village of Amaru in Papua Guinea – the only place where it lives. However, it didn’t gain official recognition until 2012. It produces a sound very similar to that of insects in order to mate and can camouflage itself very well among the leaves on the ground in the middle of the rain forest.

Despite its small size, the P. amauensis frog can jump up to 30 times its size. It’s dark red in color and had gray and black spots.

Its scientific name is Eleutherodactylus limbatus, although everyone knows it as the ‘pygmy frog’. It’s one of the smallest of the anuran amphibian family. It was first discovered in 1862 by a U.S. researcher named Edward Drinker Cope.


The pygmy frog is endemic to the island of Cuba, in the Caribbean, where it prefers xerophytic forests and areas with lots of leaf litter where it can hide and mimic its surroundings. Its body is brown with yellow and black lines. It has diurnal habits and feeds on ants and spiders.

The phantasmal poison frog or phantasmal poison-arrow frog – a rather suggestive name for such a small frog – is endemic to Ecuador, especially on the Andean slopes in the center of this South American country. It chooses to live in tropical forests near streams and wetlands, with lots of leaves on the ground, although it can also be found near cocoa and banana plantations.


It’s bright red with white lines on the body and light spots on the legs, as well as large black eyes. Furthermore, it measures about 0.9 inches and its head is large in proportion to its body.

This frog’s in danger of extinction despite being so elusive to people. It has the ability to secrete a poisonous chemical substance called epibatidine in order to kill its prey. However, this substance is also of pharmacological interest to man. This is the main reason for its relentless population decline.

This is another of the smallest frogs in the world whose main color is red. In this case, the reddish tone is quite strong and striking, and is present throughout the body, except for the eyes, which are large and black.


The ‘black-eared mantella’, as it’s popularly known, belongs to the Mantellidae family and is endemic to the island of Madagascar. It prefers humid and tropical forests, swamps, lowlands, and jungles.

Because its habitats aren’t protected – i.e. they haven’t been turned into reserves or national parks – and people hunt it illegally to use it or sell it as a pet, there are fewer and fewer specimens in the wild.

Compared to the other frogs on this list, this species is gigantic, although it only reaches some 2 inches in length. This amphibian lives in humid and shady places in North America, specifically in Florida, Texas, Missouri, and Maryland.


Its body can be green, gray, or brown -not at all showy- and it has a ‘teardrop’ shape, with a small face and a large rear. It has a tiny mouth and no warts or ridges on its skin, which is very resistant to avoid ant bites, on which it feeds.
The Smallest Birds in the World
These birds are only a few inches long but are easily spotted by their striking feathers. Here are the five smallest birds in the world! Read more »
Link copied!
Interesting Articles
Amphibians
Monkey Frogs: Habitat and Characteristics

The banded bullfrog, also known as the Asian painted frog, is an amphibian that’s becoming increasingly popular as an exotic…