Everything You Want to Know About the Class Amphibia

Species that combine the aquatic environment with the terrestrial environment belong to the animal class amphibia. 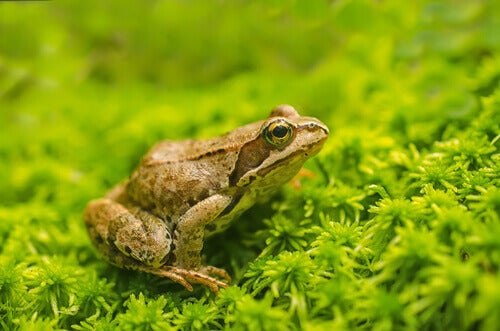 Amphibians were the first animals that, according to the theory of evolution, were able to leave the water and start living on land. However, they’ve never quite left the aquatic environment. Do you know how to distinguish an amphibian from an aquatic animal? Do you know which animals are amphibians? We’ll tell you all about the species that belong to the class amphibia.

The definition of amphibians

The class amphibia, by definition, includes animals that live their lives both in water and on land. They’re animals whose habitat needs mixed settings, such as lakes, ponds, riverbanks, or wetlands.

Amphibians need to live both in water and on land. They meet their vital needs in these two environments. For example, they reproduce and grow underwater, but feed on land.

In addition, amphibians undergo a drastic physical change as they grow and develop, which we call metamorphosis. After hatching, the eggs hatch into a larval stage, which we also call ‘tadpoles’. While they’re in this state, they develop their adult body, in which they grow legs, their body, and even change their way of breathing or feeding.

As larvae, or tadpoles, amphibians feed on vegetables, but when they reach adult life, they become carnivores. They begin to feed on insects, worms, spiders, and other small animals.

Their respiration also changes radically. While they’re larvae, they have gills and can only breathe underwater. But they develop lungs and, when they’re adults, they can only breathe out of water.

Things members of the class amphibia

Almost all amphibians develop four legs, with their corresponding joints, when they become adults. There’s only one exception: the family of caecilians or apoda, which maintain a wormy appearance for the rest of their lives and, in many cases, live underground.

Another thing they have in common is that they reproduce by means of eggs. Each species takes care of the eggs in a different way, although most of them deposit them underwater and a gelatinous substance holds them together and prevents them from dispersing. The midwife toad, for example, decides to carry them on its back for a while.


All amphibians have skin that has the same essential structure, although it has very different aspects depending on the species. In general, it’s hairless and has scaleless skin that’s permeable to water and which has a multitude of glands in it that helps amphibians fulfill their vital functions.

These animals can be of many different colors. In many cases, the colors are intended to blend in with the environment, but, in others, the colors are bright and striking to alert predators. Some amphibian species have glands that secrete venom for protection.

Another thing that’s common to all amphibians is the way they regulate their body temperature – it depends on the ambient temperature. Therefore, they’re not able to regulate their temperature on their own, which is why they often need to bask in the sun to warm up.

Amphibians can be found almost everywhere on the planet, as long as there’s a humid environment. However, they don’t exist in very cold territories such as the poles, some Atlantic islands, or in the desert.

There are three large families within the class amphibia: Urodela, known as salamanders or newts; anura, which we call toads and frogs; and apoda (caecilians).

Salamanders don’t lose their tails in their metamorphosis and, as adults, they look much as they did when they were larvae. They live in the northern hemisphere, with the sole exception of northern South America. Some can regenerate a limb if it’s lost or detached.

Frogs live almost everywhere in the world, except for deserts and the poles. Their most prominent physical characteristics are their large, wide jaws; inside their mouths, they may have very small teeth or none at all.

They lose their tail during metamorphosis, and their back legs are larger and more powerful than their front legs. In order to be able to jump with precision, they have a small and rigid spine, which allows them to make better and bigger jumps.


Caecilians never develop legs and don’t lose their tails as they grow. They live only in tropical regions in America, Africa, and India, and many of them carry out their lives underground. Others, however, spend most of their lives in an aquatic environment. They’re not used to living on land because they don’t have legs, but they’re still amphibians.

Amphibians are animals that are adapted to life both in water and on land, and need both environments to survive. A few common characteristics allow us to classify them as members of a very large family, even though there are also great differences between them.

Exotic Reptiles and Amphibians Can Cause Salmonella
Reptiles and amphibians are natural sources of the bacteria that cause salmonella. Read today's article to find out more. Read more »
Link copied!
Interesting Articles
Amphibians
Monkey Frogs: Habitat and Characteristics

The banded bullfrog, also known as the Asian painted frog, is an amphibian that’s becoming increasingly popular as an exotic…

Amphibians
Discover the 5 Smallest Frogs in the World

So far, the world's smallest frogs have been found on the island of Papua New Guinea, north of Australia... and…