These amphibians, thanks to their high degree of toxicity, don't have any predators. Therefore, they don't even have to camouflage themselves, as happens to other animals 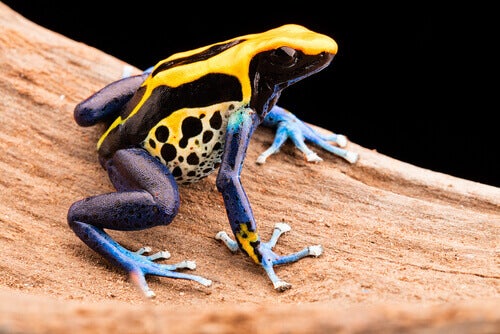 The poison dart frog or poison frog is possibly among the most beautiful amphibians on the planet. However, their colors mean that they’re highly poisonous. In fact, they’re the most toxic animals in the world. Learn more about these amazing amphibians up next!

Characteristics of a poison dart frog

The poison dart frog family actually consists of almost 200 different species. Because they’re close relatives, all of these amphibians have a few characteristics in common.

A poison dart frog’s size changes depending on the species and age of each specimen, but they’re quite small compared to the rest of the amphibians we’re more familiar with. The smallest of them are 0.2 inches long and the largest barely reach 1.4 inches.

They all have diurnal habits. This means that they’re highly active during the day and spend the night resting or hiding. Thanks to their toxicity, they don’t have any predators. As a result, they don’t need to camouflage themselves in the twilight or at night, as many other animals do.

The most striking aspect of these animals is their color. Their appearance responds to a survival strategy used by some other animals. With their bright colors, they attract the attention of any likely predator to alert them that they’re highly poisonous. Their venom is so powerful that it’s capable of killing a human being just by touching their skin.

Several studies have shown that the more colors the frogs of this family have and the more striking their color patterns are, the more venom they possess. The most venomous species is the golden frog, but there’s a wide range of colors in the family: yellow, blue, red, and brown. In addition, they can also have plain colors, with darker-colored spots and even striped patterns.

These amphibians generally feed on small arthropods: ants, spoonbills, termites, mites, etc. Their specific diet depends on the species of the frog. Larger amphibians will eat the larger insects, while smaller amphibians have to make do with mites and ants.

Interestingly, they get their venom from their diet, as poison dart frogs are not able to synthesize it themselves. Using the arthropods they eat, they store the toxins present in these in their skin. Since these toxins don’t affect them, they become poisonous to other animals.

In fact, poison dart frogs that live in captivity and have a diet without the arthropods that supply them with toxins, then they become non-poisonous in a matter of weeks. Even if they’re well-fed and healthy!

The poison dart frog family is found only in Central and South America. Their habitat ranges from Nicaragua to Bolivia, and they may also live on Caribbean islands. In addition, they have also been artificially introduced to Hawaii. There’s a greater variety of species in the areas of Panama, Costa Rica, the Colombian Andes, and the Andean areas of Peru and Ecuador.

They can be found in very different ecosystems: they like areas with a lot of vegetation and very high humidity. Moreover, temperatures must be high and constant throughout the year. Therefore, they usually live in cloud forests, tropical rainforests, and Andean forests. They can even live at 9,800 feet above sea level.

Their name comes from the belief that the tribes of the forests and rainforests used them to poison their arrows. We now know that only four species out of the total that make up this family are used by these people for their weapons. In fact, these tribes prefer to use poisonous plants for this work.

There are no major studies on the poison frog population to know if they’re at risk or not. However, we know that they have lost large areas of their ecosystems recently and have endured a deadly plague.

In addition, these frogs are also victims of poaching, and hunters later sell them as exotic pets. There’s no real data on how many frogs of this family are in the wild, but some species have been included in the list of threatened animals so that prevention and warning measures can be put into place before it’s too late.

Poison dart frogs are among the most strikingly colorful animals in nature. Moreover, thanks to their evolutionary strategy, they’re also the most poisonous. They are endemic to the humid ecosystems of Central and South America. They’re difficult to find in the wild, but, if you do, we strongly recommend that you avoid touching them!

Phantasmal Poison Frog: Care and Breeding in Captivity
The phantasmal poison frog is a tropical frog very popular among amphibian fans due to its bright colors and small size. Learn how to care for it as a pet. Read more »
Link copied!
Interesting Articles
Amphibians
All About the Reproduction of the Common Green Iguana