As a defense mechanism against dehydration, monkey frogs cover themselves with a wax-like layer that contains venomous substances. 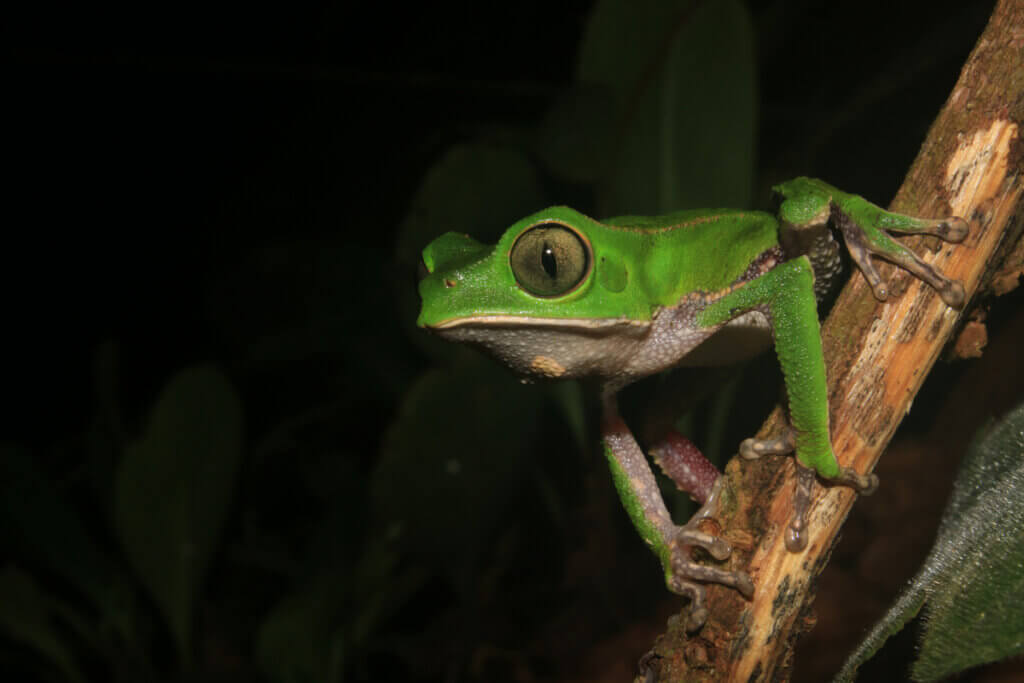 The neotropical region has the greatest biodiversity of anuran amphibians on the planet. In that area, animals have acquired very different shapes and lifestyles, and tree frogs stand out due to their adaptations. Within this group, monkey frogs are especially noteworthy, both due to their biology and their relationship with humans.

There are currently 16 species of monkey frogs, all belonging to the genus Phyllomedusa. These amphibians have developed extreme adaptations to life in trees. If you want to learn more about monkey frogs, read on.

Even though there are some differences among the 16 existing species of the genus, they all share certain similarities. Their name derives from their appearance and proportions, as well as their arboreal habits. These amphibians are relatively large, ranging in size from 7 to 12 cm (3 to 5 in).

The largest of these frogs is the giant monkey frog (Phyllomedusa bicolor). This species is generally slender, with a large head and round, bulging, striking eyes.

Their limbs are very long and thin, and end in hands with 4 long fingers on the front limbs and 5 fingers on the hind legs. The toes are opposable and finish in adhesive pads, which help them attach to and climb branches.

Their main color is green, which is more or less dark depending on the species, and covers the dorsal part of the animal. In addition, these frogs usually have bright patterns on the sides of their bodies, which may extend to their extremities.

These tones on the sides are mainly orange, yellow, and black depending on each species. The ventral side, on the other hand, is usually less pigmented.

These amphibians live exclusively in Central and South America. They mainly inhabit tropical or subtropical forested areas and flooded areas with abundant vegetation, which is essential for their biology.

Unlike other frogs, they don’t usually live in water, but spend most of their lives high up in trees, at heights between 0.5 to 4 meters (1.5 to 6.5 ft). Just like other amphibians, they have very porous skin, so they run the risk of dehydration by living so far from water.

These frogs have developed a series of adaptations to avoid dehydration. They’re mainly nocturnal, so they spend the day hidden among leaves with their legs tucked close to their bodies. As a result, besides avoiding sunlight and reducing evaporation, they’re able to camouflage themselves better with their environment.

Moreover, some species are able to secrete a wax-like substance through their skin. With the help of their hind legs, they frequently and thoroughly spread this compound over their entire body, creating an insulating layer.

It not only protects them from drying out, but also contains toxins that act as a defense mechanism against predators.

During reproduction, monkey frogs descend from treetops and settle in the vegetation of water bodies, which are often temporary ponds. They lay their eggs on broad leaves, which they remain attached to thanks to the gelatinous substance that envelops them. The frogs then fold the leaf around the clutch, forming a small nest.

Upon hatching, the tadpoles fall into water, where they complete their development until they reach the metamorphosis process. After their transformation, the young climb into trees as adult frogs, where they’ll live for the rest of their lives. While in a larval state, they feed on plant matter, but in their adult form they catch prey with their protractile tongue.

As mentioned above, several species contain toxins in the wax-like secretions of their skin. These toxic substances are traditionally used in rituals by several indigenous tribes in these areas, who call the secretions kambo or sapo.

For these purposes, they hunt the frogs and place them over a fire with their limbs tied and extended, with the aim of stressing the animal in order to secrete these substances and enable indigenous men to collect them. After this, the animal is usually released.

Once obtained, the substance is applied to wounds or burns and passes into the bloodstream. The effects are varied and include vomiting, diarrhea, and loss of consciousness. However, it can then act as an analgesic and decrease the perception of pain. For natives, this ritual brings good luck and makes them better hunters, among other benefits.

Even if these traditional practices don’t seem to have serious effects on the populations of Phyllomedusa, the use of toxic secretions is becoming popular as an alternative therapy without scientific support. Some people even use it to illegally improve performance in horse racing. So, in the long run, this could pose an increased risk for the conservation of monkey frogs.

Amphibians
The Poison Dart Frog, the Most Poisonous Frog in the World

The poison dart frog is among the most poisonous animals in the world, despite its small size and attractive appearance.…

Today's article is about a rather interesting, but usually overlooked, group of anurans, the Wagler's spadefoot toad. Anurans are tailless…