In this country bathed by the waters of the Indian and Pacific Oceans, there are unique wild species that, due to the separation of this landmass from the rest of the continents, have very peculiar traits. 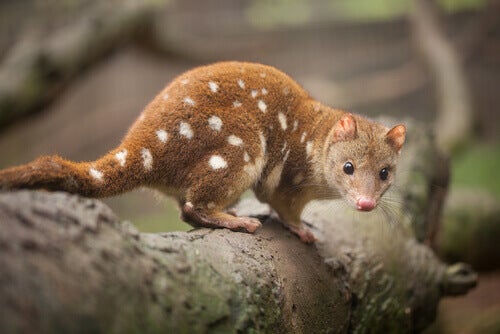 Since we were children, we’ve heard stories about the Australian fauna, with special emphasis on koalas and kangaroos. But this country has much more to show us than just these typical marsupials that often appear in cartoons and movies.

Depending on the case, these animals can either be very docile or look like they were born in hell! The truth is that the Australian fauna is varied, with some really peculiar species. So, stay tuned as we take a detailed look at them here.

The short answer to this question is no, it’s not dangerous unless you provoke it, like everything in nature. Australian animals are famous for surviving in really dangerous terrains.

The main reason these animals have evolved differently is due to the separation of the landmass from the rest of the world. Much of the land is separated by the Indian Ocean, the Coral Sea and the Tasman Sea, and this has given rise to very peculiar and emblematic animals.

Of all the mammals in Australia, approximately 80% are endemic –they only live here in the wild. This is significantly more than in any other region of the world. From the friendly kangaroos to the curious platypus, Australia has the most peculiar mammals on the planet.

Among the reptiles, 90% of them live only in Australia. The saltwater crocodile between 6 and 8 m (20 to 26 ft) long, the big-headed turtle and the great variety of native snakes stand out.

The fish that inhabit the country and its surrounding waters are also endemic to the area. It’s believed that 40% of the marine species are found only in this region, and it could be more considering that a great part of the planet’s oceans is yet to be explored.

Australian mammal fauna has a large endemic presence, with some 55 species that can only be found in the country. Most of these animals’ names have their origin in the local Aboriginal dialect.

Australia’s mammals are among the most varied and extravagant out there. The country is home to everything from the adorable koala to the venomous platypus. In case you didn’t know, the platypus is one of the few oviparous mammals on the planet.

In addition to these mammals, there are also the echidnas, monotreme animals like the platypus. The country also has three breeds of quoll (in the photo at the beginning of this article), bandicoots, and bilbies, the latter two being omnivorous.

Among the herbivores, we have the wombats (see above), koalas, kangaroos, and possums, which belong to the Diprotodontia order. Of course, these animals are marsupials: mammals with an external pouch in which the young complete their growth.

It seems that 90% of Australia’s reptiles and amphibians are endemic to the region, so some of them can be quite strange. The freshwater crocodile is one of the largest species in this family, and among the amphibians, we have several species of frogs.

The Australian fauna is known for having more venomous snakes than non-venomous ones. Among them are the ladder snake and the tiger snake. The marine varieties of snakes are very venomous, and some of them are at the top of the dangerous species list.

Fish of the Australian fauna

Australian marine fauna is made up of 44% of fish endemic to the region, of which the clownfish is well known in the world thanks to the movie “Finding Nemo”. Many of these marine species are highly dangerous due to their venomous nature.

Here we also find the Port Jackson shark, an animal that could frighten anyone, but which is really not dangerous at all. It doesn’t attack humans unless provoked. However, in its last recorded attack, its teeth couldn’t pierce the skin of the lucky victim.

The dugong is unique to the region, being one of the few aquatic mammals in the area. Finally, Australian waters are home to several species of dolphins, corals, sharks, and bony fish.

The Impressive Wildlife of Madagascar
Madagascar is considered one of the most biodiverse countries in the world. Learn all about some of their species in this article! Read more »
Link copied!
Interesting Articles
Wild Animals
The Fauna of the Himalayan Mountains