These beautiful urban birds are perfectly adapted to the city and their physical features make them very unique. Learn more about them. 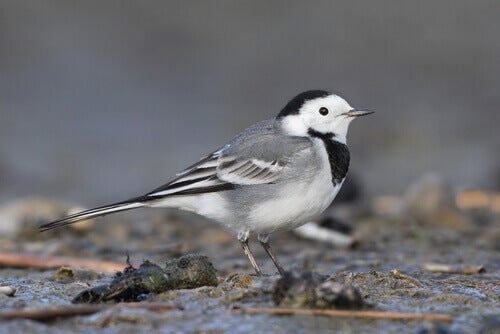 You can see them–and hear them—from your window. They’re all around when you’re at the park exercising or when you’re gardening at home. These beautiful urban birds have become used to being around people, and they even build their nests in trees or on lamp posts. Learn about the most common ones in this article.

They have small and robust bodies, tiny beaks, and they sing beautifully. They usually do this in the early morning or when the sun is out. Urban birds aren’t afraid of people and you can even feed them if you go to the park regularly. Here are some of the most beautiful urban birds you can find in the city:

According to popular tradition, the white wagtail—which is the bird in the cover photo—announces the arrival of winter. In addition, they’re known for their beautiful white, gray, and black feathers. Their tails are always moving, they’re about 8 inches long, and they feed on insects. Also, they live in large areas, which is why we frequently see them in parks.

These beautiful urban birds build their nests among trees, rock wall crevices, building ledges, and anywhere else it can. Currently, we know of eight subspecies of this bird, which differ from each other by their feather design.

The pardal, or house sparrow, is the bird most adapted to urban life. Also, it can live in Europe, the Americas, and Africa. It can measure 6 inches and weigh about 1 ounce. It has a strong, thick and cone-shaped beak that helps it feed on grains.

There are notable differences between males and females. For example, males are larger and they also have different plumage. Males have gray feathers with black and white spots on their chests. In addition, they have brown and black on their backs. On the other hand, females are completely brown, but they can be different shades.

Another urban bird that you’ve definitely seen before is the goldfinch. Their beautiful plumage makes them unique: red head, black and yellow wings, and a white belly. Goldfinches live in America, Eurasia, and especially in the south of the Mediterranean Sea.

In addition, these beautiful urban birds feed on all types of seeds—especially sunflower and wheat—and some insects. They’re famous for their songs which include trills, very similar to that of the canary.

Within the Carduelis genus, to which this bird belongs, we can find other city dwelling birds. For example, the common linnet, the greenfinch and the blackhead.

Its scientific name is Turdus Merula and it’s unique because it’s completely black, except for its yellow beak. However, that’s only the case with the males; females are brown.

The common blackbird is native to Europe, North Africa, and Asia. However, it now also lives in South America and Oceania. Pairs are monogamous, they’re fairly territorial, and they feed on worms, amphibians, berries, and drupes.

The last of our beautiful urban birds in this article is the famous pigeon. This bird lives in parks, on rooftops and in the trees of every city. However, they’re originally native to Africa and Eurasia.

These birds are gray with black stripes on the edges of their wings. Also, they have white beaks, red eyes, and colorful necks in shades of green and pink. In addition, they can be 16 inches long and reach a 28 inch wingspan when flying.

The common pigeon stays in pairs during the breeding season, but they travel in groups the rest of the year. They eat off the ground, but will take off in flocks if you disturb them. When they do this, they’ll flap their wings very loudly. The chicks are yellow at birth and their parents feed them through regurgitation.

As adults, they eat grains, seeds, and plants. However, sometimes, they may also add insects and fruit to their diet. In addition, they drink a lot of water and like to bathe in ponds and other sources of water.