The Characteristics and Behavior of the Blackbird

This is the most popular bird species in the world and can be defined by its ability to adapt to urban habitats. It has a peculiar way of walking by making tiny jumps and makes a variety of sounds. Today, we'll tell you all about the characteristics and behavior of the blackbird. 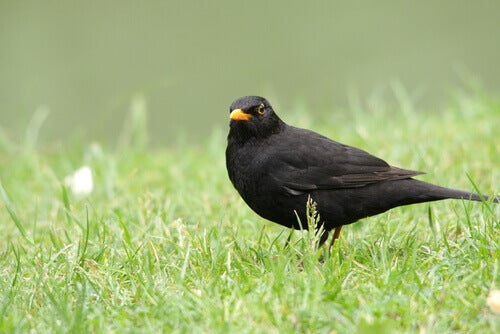 The term blackbird refers to a great variety of birds that are characterized by their black feathers and melodic song. They’re easy to find all over, both in city gardens as well as out in the country. In the article below, we’ll tell you all about the characteristics and behavior of the blackbird.

The characteristics of the blackbird: Taxonomy and morphological aspects

As we mentioned, the term blackbird refers to many different species of birds. On this occasion, we’re going to look at the main characteristics of the common blackbird, the most popular variety in the world.

The common blackbird, whose scientific name is Turdus merula, is a passerine bird belonging to the Turdidae family. Originally, these birds adopted migratory habits, but have since become sedentary, adapting to city life and human beings.

Blackbirds aren’t hard to feed–they can eat whatever they find. They maintain a varied omnivorous diet that easily adapts to different situations.

Many birds stand out for the great variety of bright colors in their feathers. However, when it comes to blackbirds, just the opposite is true. These birds have a uniform plumage, which is black in males and brownish in females. Thanks to their dark and somber bodies, they’ve been the protagonists of many mythologies, including Greek and Nordic mythology.

These are medium-sized birds with a body measuring between 10 and 12 inches in total. As for their wingspan, it can measure between 13 and 15 inches, approximately. And in regard to their weight, blackbirds can weigh between 2.5 and 4.25 ounces.

Blackbirds can be found on all the continents, with the exception of Oceania and Antarctica. What’s more, they’re the national bird of both Costa Rica and Sweden.

Sexual dimorphism in the common blackbird

Common blackbirds display great sexual dimorphism. In other words, it’s very easy to distinguish between males and females based on their physical characteristics. Male blackbirds have completely black and very shiny feathers. At the same time, females have tan or brown feathers that are more of an opaque color. What’s more, females have reddish feathers on their chests with some black spots.

But that’s not all… We can also observe a significant difference between male and female beaks. Females have a dark tan beak–almost brown–, while males have a completely yellow beak. Both males and females have two small nasal orifices that allow them to breathe easily.

The habitat and behavior of the blackbird

One of the main characteristics that define the behavior of the blackbird is its lack of trust. Blackbirds are constantly on the alert for possible predators and invaders.

In order to guarantee its safety, many specimens prefer to live in abundant thickets or crops where they can easily hide. When they sense a threat, they will emit a strong sound, which is a typical sign of fear among this species.

This animal’s omnivorous diet is very eclectic and adapts to the availability of food in a given environment. In general, it obtains its food by digging around in the ground and bushes. There, it finds insects, worms, spiders, snails, grains, seeds, etc. The blackbird also enjoys eating certain fruits, such as apples and peaches.

Blackbirds make a habit of building their nests in small trees and bushes. On the grounds, they move about by making tiny leaps. When in the air, their flight is agile, constant, and serene. When still, the blackbird maintains an erect and elegant posture.

One of the things that most characterizes blackbirds is their amazing capacity to adapt. With the expansion of urban areas, these birds integrated into the city and adjusted to human habits. Interestingly, they adapted so well to this new habitat that they left their migratory life behind and took on a more sedentary lifestyle.

The song of the blackbird

The song of the blackbird stands out so much among birds that it received the nickname ‘Beethoven‘. And such a reputation is no coincidence.

Blackbirds are capable of reproducing and memorizing an enormous variety of songs and a wide range of sounds. Therefore, they can create complex and elaborate melodies that are very similar to songs.

Flute-like, melodious sounds that can be combined into potent whistles predominate their powerful vocal emissions. They perform long successions of varied and brief stanzas and generally finish off with a very characteristic high note. They maintain classic song habits and are more active during dawn and dusk.

It’s illegal to keep blackbirds as pets. However, you can attract them to your yard using seeds. You can also spot them in parks and public gardens, generally among the branches of trees. You’ll be delighted to hear their beautiful melodies and appreciate their intense black coloring.

House Sparrows
Although the number of house sparrows has decreased remarkably, they continue being part of the urban landscape in most of the planet. Read more »
Link copied!
Interesting Articles
Birds
Discover 5 Different Types of Owls