The Song of the Nightingale

These birds are easy to listen to, but difficult to see because they are always alert. This makes them flee at the slightest sign of a threat. This migratory bird has a powerful ability to chirp. However, they also have a happy, delicate melody that people say indicates the arrival of spring. 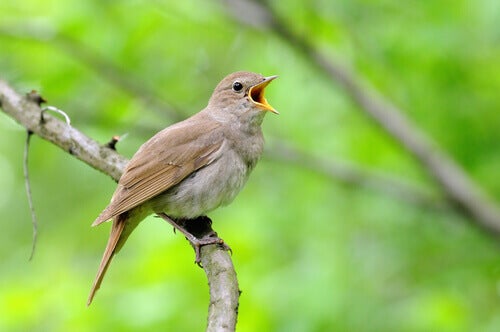 The nightingale is a migratory bird native to the forests of Europe and Asia. However, the song of the nightingale is very popular. These birds are well-loved in America, and feature in many folktales.

The nightingale: Physical characteristics and taxonomy

Nightingales, whose scientific name is Luscinia megarhynchos, are passerine birds that belong to the Muscicapidae family. They have migratory habits and maintain an omnivorous diet. However, they are mostly insectivorous.

However, the appearance of these birds is modest compared to their vocal power. These are small birds, whose bodies measure between 6 to 6.5 inches in length.

In their plumage, they are mostly brown and brownish tones with slightly reddish shades. Their chests have a more grayish tone with reddish or white nuances.

However, young nightingales are often distinguished from adult birds by their mostly reddish plumage. In addition, white and gray is more prominent in the lower parts of their bodies.

The nightingale’s beak is equally discreet. They have small, sharp beaks with a dark brown color on the upper jaw and slightly lighter coloring on the lower jaw. Their legs and feet have a clear, soft coloring, similar to tan, flesh color.

In terms of sexual dimorphism, the nightingale is one of the birds with the lowest morphological difference between males and females. Both sexes have very similar plumage and similar sizes. However, females tend to have duller colors on their tails.

When analyzing the song of the nightingale, the males have a more powerful and diverse song than the females. However, both sexes are capable of singing very complex melodies.

The musical richness of the song of the nightingale

Despite this bird’s modest appearance, the song of the nightingale reveals remarkable delicacy and significant power. Their vocals give off cheerful and lively sounds. These are then combined with loud whistling and some jabbering.

These small birds maintain different habits for other birds. In fact, they don’t just sing at dawn and dusk. They also sing at night, even when it’s dark outside.

Specialists point out two main variables in the song of these birds. During courtship, the song of the nightingale becomes louder and louder, mainly during the spring at sunrise and sunset. This song is mainly dedicated to attracting females. However, they can also use their vocals to challenge other males.

After mating, nightingales often sing a softer, less vigorous, but more constant song. Typically, you’ll hear these songs when summer is approaching, near the end of spring. During this time, you can appreciate the enormous musical wealth that reveals the infinite melodies of the song of the nightingale.

Curious facts about the song of the nightingale

In Latin America, mainly in regions of Argentina and Paraguay, the song of the nightingale is a fundamental part of national folklore. This chirping is so common in fields that many poets and singers use this bird as a source of inspiration. On many occasions, you can see nightingales honored for their song.

Another interesting fact about the song of the nightingale is that melodies are transmitted between generations. Each nightingale teaches their chicks the melodies that their parents taught them when they were learning to sing. As a result, these birds represent a beautiful family and natural heritage.

The song of the nightingale: Easy to hear, but difficult to observe

If you want to hear the song of the nightingale, you can go out to a field during the spring. Sit under a tree and enjoy the beautiful melodies at sunset. In fact, this is a great way to say goodbye to the winter cold. However, seeing these birds is a challenging mission, even for expert wild bird photographers.

Nightingales are lively birds that are always alert. As a result, they can easily escape if they perceive anything strange in their environment. They use their singing to attract females, but also to communicate any threats to the rest of their community.

These little singers often hide among the leaves of the leafiest trees. Then, they can quickly jump from branch to branch. However, if they notice the presence of a predator, they quickly fly away. As a result, to enjoy their melodies, you need to be discreet and respectful so they don’t fly away.

The 5 Prettiest Songbirds
There are few things quite like waking up to a beautiful birdsong at your bedroom window. In this article, we'll tell you which are the prettiest birdsongs. But if you want to enjoy them, don't trap them in a cage... better to plant more trees! Read more »
Link copied!
Interesting Articles
Birds
Discover 5 Different Types of Owls