Learn How to Identify a Bird Song From Home

The sound of birds signing can help you relax and also entertain and sooth the mind. Therefore, we want to share with you how you can identify bird songs from the window of your own house. 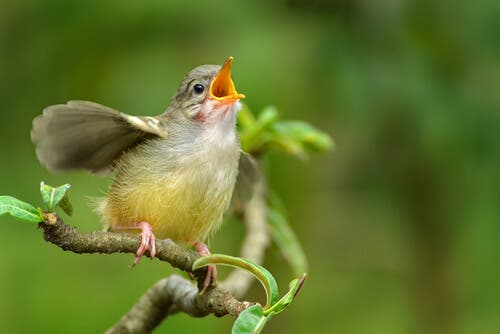 Even in urban areas, bird song has always been part of our lives. However, with the sounds of traffic and the rat race we live in, they have often gone unnoticed.

Here’s a little more about the fascinating world of bird songs. Plus, we’ll give you some keys for you to learn how to identify them from your home!

In the world of birds, the term “vocalization” refers to any sound they emit through their special organ: the syrinx, which is located in the trachea.

This apparatus is so sophisticated in some birds that the air’s direction in the windpipe can be distributed independently in its two halves. Therefore, they are able to produce two musical notes at once. Amazing, isn’t it?

The difference between a “bird song” and a “bird call” is arbitrary. However, in general, it is understood that bird songs are usually longer in duration and more complex. On the other hand, a bird’s call tends to be the opposite, since they use them to alert or communicate with other birds in a short and concise way.

The singing of birds is usually more musical and sophisticated within the Passeriform order such as the sparrow, the goldfinch, and the canary.

These sounds are emitted mostly by males, and their purpose is usually a sexual call for mating. There are several hypotheses for the origins of birdsong: