Characteristics of the Trumpeter Swan

Trumpeter swans have gained their name because they have a deep cry that sounds like a trumpet. 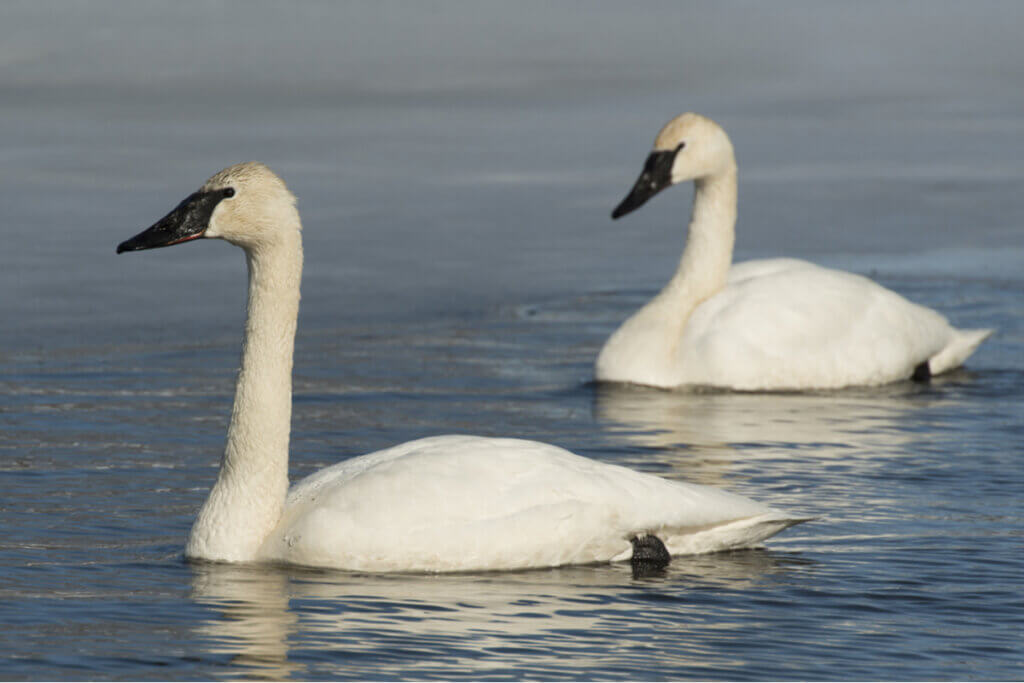 Certain characteristics of the trumpeter swan allow us to easily differentiate them from the rest of its relatives. One of its main features is distinguishable to the naked eye, as it’s one of the largest flying birds that exist.

Unfortunately, this species was on the verge of extinction at the beginning of the 20th century. Luckily, however, these days its population has recovered spectacularly. Keep reading to find out more about this wonderful bird.

At the turn of the 20th century, the number of trumpeter swans in existence was alarmingly low. This was a consequence, in large part, of the sheer mass of migration to the western United States.

The numbers were so low that, in 1930, the trumpeter swan bird population was lower than 100. Nevertheless, the population has since recovered thanks to proper containment and protection measures.

The trumpeter swan has the scientific name Cygnus buccinator. It belongs to the Anatidae, making it a relative of geese, ducks, and teals. The name “trumpeter” comes from the fact that it emits sounds similar to a trumpet. The tone is low, allowing it to be distinguished from its more similar relative, the Tundra swan.

Physical characteristics of the trumpeter swan

Among all the swans, the trumpeter is considered to be the largest of its kind. Their average wingspan can reach up to three meters (10 feet).

Besides their size, another distinguishable trait is its beak. Trumpeter swans’ beaks are completely black while, in other species, the beak tends to include a yellow or orange mark. Adult swans are totally white, while young swans have some gray tones in their plumage until about the first year of life.

The trumpeter swan can be found throughout North America and Alaska. It’s a migratory bird, so its location changes during certain seasons of the year.

With respect to diet, trumpeter swans are omnivorous animals and they typically eat both aquatic plants and insects, as well as small invertebrates. When it’s time to capture food, these birds hunt while diving into the water. During the hunt, they beat their feet quickly on top of their prey to capture it.

Normally, the trumpeter swan eats food from the water’s surface or just below it. However, if the bird is in deeper water, this majestic creature has to dip its neck and lift its tail to get its next meal.

An interesting detail about the trumpeter swan is that it’s a monogamous species. From the moment the male and female have offspring, the two will spend the rest of their lives together.

In nature, monogamy is a behavior observed more often in birds than mammals. Other monogamous bird species are penguins, doves, parrots, and albatrosses.

Baby trumpeter swans can swim practically from the day they are born. However, they can’t fly until about four months after hatching from their mother’s egg. For this reason, fathers will look after and protect their young until they can fend for themselves. In the meantime, they guide their offspring to food sources and teach them how to capture food.

Trumpeter swans are prey to many predators, both small and large, though the predator depends on which stage of life the swan is in. For example, mainly raccoons, crows, brown bears, and coyotes eat swan eggs.

Still, one of the trumpeter swan’s biggest enemies, especially to adult swans, is the golden eagle. This predatory bird can quickly capture these birds and devour them without a problem.

Similarly, trumpeter swans face many threats, which include human actions like hunting and destroying swan habitats. While these aren’t necessarily predatory acts, they certainly are a concern to the bird’s safety.

In 1935, the United States government acted swiftly to save the trumpeter swan species. They established breeding and protection programs in two national parks:

Thanks to these measures, today the trumpeter swan remains to be a growing species. It has moved from being a small, isolated population in danger of extinction to growing significantly in the last forty years.

In conclusion, the characteristics of the trumpeter swan that can help to identify it are its size, physique, and distinct call. The species is migratory and can be seen across North America and Alaska during different times of the year.

Even though humans brought the trumpet swan to near extinction, fortunately, due to recuperation efforts, this beautiful bird and other species remain in the wild.

Swans – Characteristics of a Most Graceful Animal
The swan, a most graceful animal, is often used as a symbol of beauty and eternal love. They're monogamous. That is, they mate for life. Read more »
Link copied!
Interesting Articles
Birds
The Effects of Climate Change and Plastic Pollution on Seabirds