Cockatoos: Everything You Need to Know

These exotic birds are characterized by a colorful plume of feathers on the top of their heads. They also stand out for their sensitivity to music, as they are able to keep up with the beat of a song and even dance to it. 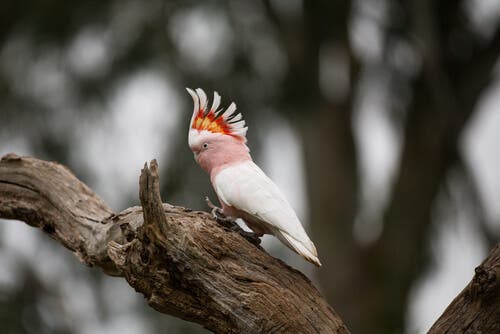 Cockatoos are unique birds. Although they aren’t strictly considered parrots, they do belong to the order of Psittaciformes and have many similarities.

The main distinguishing feature of the 21 species of cockatoo and parrots is the cockatoo’s plume. These birds have an erect plume of feathers on their heads. The feathers unfurl when they’re excited or angry, as well as during courtship.

Although parrots and cockatoos have very similar claws and beaks, cockatoos have much duller coloring than true parrots. They are often white, gray, or even black.

These birds also don’t make nests. Instead, they use holes in trees as nests. As a result, deforestation is one of the main threats to their survival. By cutting down trees, they don’t only lose territory, but they also lose places to reproduce.

The feeding habits of these birds and parrots are very similar. They eat seeds, bulbs, fruit, flowers, and insects. Another curious feature is that cockatoos are one of the few monogamous animals in the animal kingdom.

In general, these birds have bright colors, such as yellow and pink, concentrated on their crests or other parts of their plumage, such as their tails or cheeks.

The unique behavior of cockatoos

As for their behavior, these are very intelligent animals, just like true parrots. They have enormous emotional intelligence. However, this makes this susceptible to diseases, such as depression. When depressed, cockatoos can pluck out their feathers.

There is also a difference between cockatoos and other parrots on a behavioral level. Cockatoos are especially sensitive to music. Studies show that they can keep up with the beat of a song and even dance to it.

Besides music, as incredible as it may seem, researchers have seen mating birds performing percussion in their natural habitat. To do this, the male bird takes sticks and hits trees with them in a rhythm. The females then choose the most lively male.

Where these birds live

One of the main differences between these birds and parrots is where they live. Parrots populate parts of Africa and South America, while cockatoos’ habitat is reduced to Australia and the islands around it.

These birds use a wide variety of habitats, as long as there are trees to use as nests. They can inhabit jungles, high mountain forests, or mangroves. While some species barely move around, others travel hundreds of miles in search of food.

Unfortunately, many of these birds are considered pests. They take advantage of human crops that have displaced their habitats. In urban areas, they often destroy outdoor objects with their powerful beaks, such as satellite dishes or wiring.

The main threats to this species are the aforementioned deforestation and trafficking of wild species, due to their use as pets. Normally, these birds are placed in plastic bottles or other containers inside suitcases. Then, traffickers sell them illegally in other countries.

Creating the Ideal Environment for Exotic Birds
In this article, we'll tell you how to create the ideal environment for exotic birds, from housing and diet, to good hygiene. Read more »
Link copied!
Interesting Articles
Birds
Diurnal Birds of Prey, Rulers of the Summits