Why Parrots Molt and Their Plumage Condition

The condition of a parrot's plumage and when they molt are great indicators of their health and that of other species. 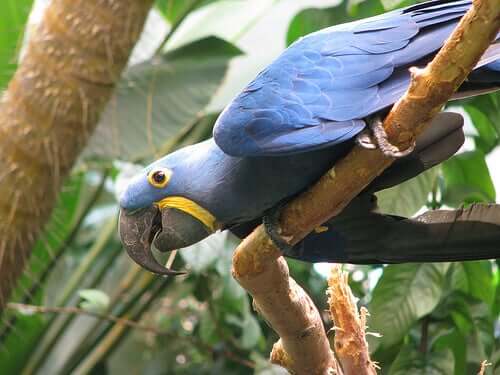 Feathers can reveal diseases. Therefore, we need to pay close attention to the color and condition of feathers and whether parrots should be molting or not. We can control this, and prevent diseases, through their diet. Read this article to learn why parrots molt.

Normally, a bird’s feathers have a ‘life cycle’, known as molt. This process is physiological, and it involves progressively shedding old feathers, and replacing them with new ones. A parrot’s molting cycle usually takes place over one or two years. This usually increases during spring and fall.

When a feather sheds perfectly, it shouldn’t leave any areas uncovered or marks on the skin. Therefore, when old feathers fall out, an abundance of quills and growing feathers will be more visible.

New feathers take on the same color as the rest of the bird’s plumage. However we’ll see color changes, but only during the first molt of certain species like the parakeet. The chicks usually change color after their first molt to reveal their adult feathers.

One of the main anomalies when birds molt are signs of stress. These appear as dark, practically black bands that are almost translucent. Like the rings of a tree, their distance reveals to us when the bird has gone through a period of chronic stress, or has had deficiency problems.

Although they can be confused with stress markings, feathers can have depigmentation. The feathers will also appear dark but will cover more of their bodies, rather than be just a band. However, this has nothing to do with stress. This is related to poor diet and lack of sunlight. When these chronic problems arise, we need to contact a vet that specializes in exotic animals to review the bird’s diet.

Infectious diseases can affect plumage, such as those that affect the beak and feathers. This disease is caused by a virus and, in addition to general symptoms such as diarrhea, lethargy and vomiting, it can affect the plumage. Feathers falling out, discoloration, or even the appearance of abnormal colors (yellow feathers in greenish plumage, for example) are some of its symptoms.

Broken feathers are often due to poor handling, fights between parrots housed in the same enclosure, or the use of small cages where the animal can’t move freely.

The appearance of bald spots is also frequent in parrots and pecking is one of the most dangerous cases in birds. One of the main reasons why parrots pluck their feathers is because they’re stressed. It could also be a cry for help if they have mites or other related problems.

Therefore, there are many reasons they may peck themselves. Most of the time, a specialized vet or parrot trainer will need to intervene.

In general, parrots that live in harmony with other parrots, with a well-balanced diet won’t develop plumage problems. Guaranteeing this will allow us to have healthy and happy parrots.