Did You Know There Are More than 300 Species of Pigeons?

What they all have in common is that they are very intelligent and have a great ability to adapt. We can see them survive in urban environments. Besides the white dove, there's a great variety of species of pigeons we can find throughout the animal kingdom. 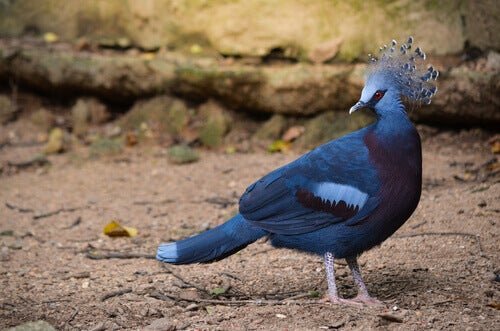 You’ve seen them in parks or on rooftops, and they all probably look similar to you. However, there are more than 300 species of pigeons that exist beyond the common urban areas where we normally see them. In this article, we’ll be talking about some of them and their characteristics.

Species of pigeons that live around the world

With the exception of Antarctica and the Arctic circle, these birds live practically all over the planet. However, their population is lower in the Caribbean area and higher in Australia and Indonesia.

Nevertheless, all species of pigeons are very intelligent, monogamous (the bird couple takes care of the chicks together), and they are quite fast as they reach flying speeds of around 35 mph.

Among the more than 300 species of pigeons, normally white doves or domestic pigeons are the first to come to mind when we think about these birds. The latter is grey and features some colorful green and pink feathers on the chest.

The Victoria crowned pigeon (this article’s featured picture), inhabits the forests of New Guinea. It’s rather large in size, usually 29 to 30 in long, and stands out for its grayish-blue coloration and for having a crest behind the head. In addition, its eyes are red and both the tip of its wings and the tail are of a lighter tone than the rest of the body. It feeds mainly on fruits, invertebrates, and seeds.

It lives in Oceania and Asia, has a dark grey body and green wings. In addition, its bill and legs are red, and its black eyes are distinctive of this species. It flies swiftly flapping its wings regularly among low forest areas. However, the emerald dove is sedentary and usually remains on the ground for a long time looking for fallen fruits to eat.

This pigeon can be found in India, Nepal, the Philippines, Thailand, and China (among other places) and its plumage is very ‘extravagant’. Moreover, the feathers on its chest are white while its wings are green and the back of its neck shows an orange color.

This bird is found in the area of New Guinea, the Solomon Islands, and the Bismarck Archipelago. Moreover, it prefers to live in humid tropical forests. As the name suggests, it has a white breast while the rest of its feathers are usually grey or black with some other tones like purple, for instance.

This pigeon lives in small islands and in coastal regions from the Andaman and Nicobar Islands, India, east through the Malay Archipelago, to the Solomon Islands and Palau. In fact, the Nicobar Pigeon turns out to be related to the long-time extinct Dodo bird.

It’s a rather large pigeon, measuring around 16 inches long and its feathers are quite colorful. It has a silver head and green wings while its body has a bluish tone and reddish legs. In addition, it has a turkey-like bulge on its beak and travels in flocks between islands.

This species is endemic to Sri Lanka, especially the Horton Plains National Park. It has a lilac-colored head, its belly and tail are light-colored and its wings are dark. In addition, it builds its nest in humid forests and will lay a single egg per season. It can fly very fast, feeds mostly on plants, and is quite discreet.

This bird is almost like a white dove, except for the lower part of its tail and its dark-grayish wings. Its eyes are black and it also has a grey-colored beak and legs. In addition, it lives in New Guinea and some parts of Australia.

This large pigeon lives only in Samoa and is, unfortunately, an endangered species. It’s approximately 12 inches long, has a large, curved, and hooked bright red bill and dark plumage (black or brown). However, its legs and eyes are of a lighter color. Both males and females are similar in appearance, and their beaks show orange markings while they’re still young.

This pigeon is endemic to the Canary Islands and it prefers laurel forests to live in. One of its main characteristics is the reddish tone of its feathers and the orange stripe at the tail’s center. In addition, it feeds mostly on grains and it takes advantage of gaps and cracks between the rocks to build its nest.

Its scientific name is Patagioenas flavirostris and it lives in the United States, Mexico, Costa Rica, Honduras, and Nicaragua, mainly in rain forests at sea level. Moreover, it nests in the trees and lays one egg at a time. As the name suggests, its bill has reddish tones and so do its wings and belly.

What do you think about these 10 species of pigeons? Did you already know some of them? We hope you enjoyed learning about the ones you didn’t!

Pigeons in Big Cities: A Major Plague
Today we want to take a moment to analyze the major problem of pigeons in big cities around the world. How can we deal with the problem correctly? Read more »
Link copied!
Interesting Articles
Birds
Discover 5 Different Types of Owls