Differences between Black and White Swans

While the white-colored swan specimens live in the northern hemisphere, the dark ones only inhabit Australia. Aside from the obvious difference in their plumage's color, the black swan's beak is red with a white tip, while the white swan's is orange with a black tip. 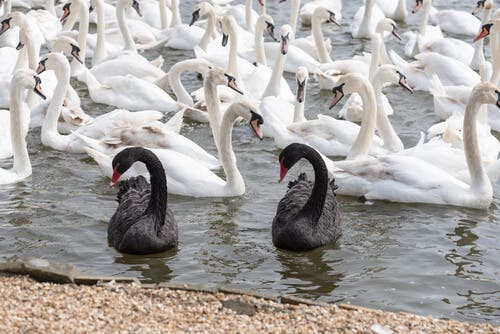 Besides having different colored plumage, black swans and white swans also differ in other aspects. In this article, we’ll be talking about the different characteristics that we can find between these two species. We’ll cover where they live, how they behave, and even the roles that they play in popular culture.

What to know about the white swan

Its scientific name is Cygnus olor and is a species of bird typical of the Northern Hemisphere. They are considerably widespread, as we can see them throughout Europe, Asia, and North America. In addition, the white swan inhabits shallow lakes and rivers that have tall vegetation on their banks.

White swans migrate at the beginning of winter to estuaries near the sea. Although they’re quite territorial, they form groups of dozens of specimens in order to protect each other. The young ones that are up to four years old are grouped separately from adults and their younger offspring.

Although swans don’t make sounds like other birds do, they do have the ability to hiss and snarl to communicate with their young ones or scare off intruders. In addition, when this happens they will usually also flap their wings.

As for its physical characteristics, the white swan has white feathers, with only its beak and face being orange and black. In addition, this species doesn’t exhibit sexual dimorphism, although the males are a little larger. On average, they can be between 55 to 63 inches long and weigh between 23.4 and 26.2 lb.

They mostly feed on aquatic plants, frogs, and insects, so they spend most of their life in the water. However, they will make their nests on the shore when it’s time for reproduction.

After mating and laying up to eight eggs, the swan couple (swans are monogamous) works together incubating them for 35 days and caring for them after they hatch. Therefore, the chicks stay with their parents until they’re five months old and then ‘move-in ‘ with the other young chicks. However, they will remain together until they’re sexually mature (at the age of three) and can find a partner.

Within popular culture, the white swan appears in different places and occasions:

Perhaps when we hear something about a “black swan” we immediately think of the film starring Natalie Portman. However, this animal is, in fact, real! Of course, it isn’t as famous as its white relative and they don’t live in the same areas of the world.

“Cygnus Atratus” is its scientific name and it’s originally from Australia. Nevertheless, it has now been brought to Europe and America to live in private garden ponds. In the wild, they live in shallow lakes and on the coast. In order to eat, they submerge their long necks up to 3 feet under the water.

Both males and females of this species have the same black-colored feathers and a red beak with a white tip. Both parents share the care of the nest, and when the young chicks are born, they’ll be  a whitish color and have a black bill. Adult black swans can measure from 43 to 56 inches long and weigh around 8.2–19.8 lbs. Similarly to white swans, male black swan specimens are larger than female specimens.

These are quite sociable animals, and, when they aren’t migrating, they travel hundreds of miles in search of food for the entire colony. In addition, they have a herbivorous diet that’s composed of aquatic and marshland plants of many different kinds.

During the rainy season, they’ll build their nests on top of the aquatic vegetation, very close to other couples. Black swans are also monogamous, just like their white cousins (pairing for life with 6% “divorce” rate), and they also form groups or colonies.

The female will lay from three to seven eggs and incubate them for 45 days. At first, the young will ‘travel’ on their parent’s backs until they are six months old and can learn how to fly. Moreover, they’ll become adults when they’re two years old.

Pet Ducks: Affectionate Companions
Pet ducks can be very affectionate, especially when they receive the right care. These birds need their food, hygiene and habitat well taken of in order to be healthy. Read more »
Link copied!
Interesting Articles
Birds
Discover Panama and its 5 Most Common Bird Species