Facts About Peacocks: Learn About This Majestic Bird

This animal's fame is due to its multicolored tail fan in the case of adult males. However, young birds and females don't have a similar plumage. This sexual dimorphism is due to the effort males must make to attract attention from females during courtship. 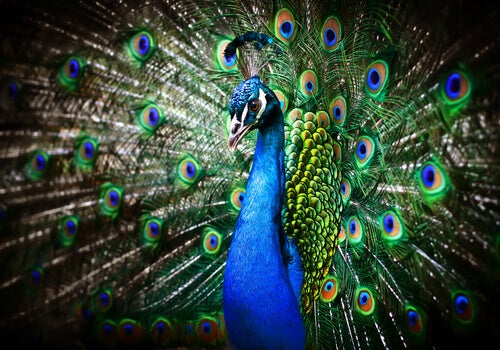 Did you know that it’s the male peacocks that have colorful, exaggerated tails? Meanwhile, females have more muted colors and don’t attract as much attention. In this article, we’ll tell you other interesting facts about peacocks.

Facts about peacocks: Habitat and behavior of the peacock

Humans have worshiped and revered this animal since ancient times due to their polychrome tail fan. Peacocks are native to South Asia, specifically from India and Sri Lanka.

These animals live in regions up to 1.5 miles above sea level. They also prefer wet or dairy forests. However, they can adapt to areas close to crops, as long as there’s lots of water.

This bird is omnivorous. As a result, their diets consist of seeds, berries, fruits, plants, insects, and small reptiles.

Peacocks nest in the ground by making a hole and then covering it with leaves and branches. Unlike other birds, peacocks are not monogamous. Males can have a “harem” of up to six females. Then, females can lay a maximum of eight light brown eggs. These take about a month to hatch.

There are several observable differences between males and females. For example, they’re very different in size. Males can measure from almost four feet from tail to beak or over seven feet to the end of their long features. They also weigh up to 13 pounds. On the other hand, females don’t grow beyond three feet and nine pounds.

The plumage is also a big difference between the sexes. Males have striking blue coloring on their chests and green colors on their heads. They also have gray beaks, tufts of white and green feathers, and black and green backs with copper and bronze tints.

Their true, primary tail feathers are dark brown. However, the secondary feathers, which can completely expand, are very colorful. They have patterns and feature their characteristic green, orange, and blue “eyes.”

Females draw less attention and can often go unnoticed. In fact, their heads are brown and their faces and stomachs are white. Although they do have a tail fan like the males, the feathers are brown with green edges.

However, the most striking part of the females’ body is their necks, which are metallic green. Everything else is brown, black, or dark gray in color. In addition, they don’t have long feathers on their secondary tails.

You’re probably wondering why males have such colorful, striking tails and females don’t. Unlike what happens in humans – where women put on makeup and wear bright, colorful clothing – in birds, male specimens have to seduce the females. In fact, peacocks aren’t an exception to this trend.

When the breeding season begins, males show off and open their tails so females can observe them from a distance. They can open and close the fan many times, in a kind of sensual dance to attract females.

Females choose males with the largest tail feathers, brightest colors, or healthiest feathers, and also the ones that dance the best.

Although the same male reproduces with several females each season, they have to attract the attention of mates. In fact, this is why the sexual dimorphism is so accentuated in this species.

And one more fact about peacocks: from the moment they reach sexual maturity, the males have their famous colorful tail. Before becoming adults, their features are similar to females.