Origins of the Legend of Storks Delivering Babies

It goes back to the Greeks and Romans who considered this bird sacred. Across the centuries, the myth was enriched and modified until reaching the version that babies come from Paris. 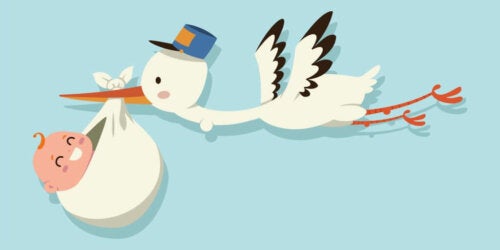 Human sexuality has long been a social and family taboo. A taboo because of an absurd embarrassment that prevented adults from telling their children the truth about conception. So, people elaborated metaphors like that of the seed, and the legend of storks delivering babies. The latter is the most popular of all.

Legend has it that this bird brings children in a cloth hanging from its beak. Next, we’ll see the connections between this bird and the birth or arrival of human babies. We’ll also analyze its effect on different manifestations of popular culture.

Origins of the legend of storks delivering babies

The traits and behavior of this long-legged bird have favored its association with the coming of babies.

On the one hand, storks are migratory birds, so they usually return to the same place every year. Their return usually coincides with the arrival of spring, the time of blooming and fertility.

On the other hand, storks live with the same partner throughout their lives, and have a very particular reproductive behavior. For the incubation, they elaborate the nest with much zeal, they conserve it and they continue constructing it year after year. They place it on top of trees or buildings such as towers or bell towers.

Once the stork’s young are born, they’re fed and nursed with care and devotion until they can fly.

This behavior was observed by the Greeks with great respect since ancient times. So much so that it was a crime to kill this bird. Romans, as well, considered them sacred. They believed that their presence was able to protect women as well as marriage, little children and the process of birth.

The legend continued to be fueled in the Middle Ages. At that time, people believed that unborn babies inhabited the wetlands frequented by these birds.

Continuing this journey through time, for the ancient Scandinavians, the stork was a symbol of luck and its presence was foretelling pregnancies.

Already in the 19th century, Han Christian Andersen collected the legend of storks delivering babies. In his tale “The Storks”, he presents a story about this myth.

Later, the legend changed a little, and it now states that these birds bring children from Paris.

Why do storks come from Paris according to the legend?

According to the saying, storks used to migrate to an area near Paris, instead of Africa. They had their nest on top of a house, and their arrival coincided with the birth of a baby belonging to the couple that lived there. Thus was spread the myth that said that the storks brought the babies from Paris.

The most common image representative of this legend is the stork with the baby in a cloth hanging from its beak. The legend has survived intact to this day, and is still in use today.

For parents of children who ask many questions, this legend of storks delivering babies from Paris has been the least uncomfortable option, rather than telling the truth about human reproduction.

The legend of storks delivering babies has found fertile ground in literature and other genres. In the contemporary era of commercial advertising, advertising agencies have taken advantage of this romantic simplification of human reproduction for their purposes. As a result, they’ve reinforced it even more.

For example, Walt Disney’s animation “Dumbo” presents the birth of children according to the described legend. If we watch children’s films, we’ll find more examples.

Should parents continue to tell children the legend of the storks?

It’s up to parents to choose the information that they give their children as part of their education. Many still use the story of the white stork bringing a wrapped child in its beak from Paris. Other parents choose to tell the truth, in a completely natural manner, which allows the child’s intelligence to develop properly.

The legend of the swallows and the thorns of Christ
According to popular belief, a group of swallows began to remove Jesus's thorns after he was crucified and alleviated his suffering. Hence they are considered to be sacred animals. Read more »
Link copied!
Interesting Articles
Birds
The 5 Fastest-Flying Birds