The Habitat, Diet, and Behavior of Storks

These animals are wading birds and have legs that look like stilts. While these make it easier for them to walk in shallow water, it makes them look clumsy on land. Today, we'll tell you all about the habitat, diet, and behavior of storks. 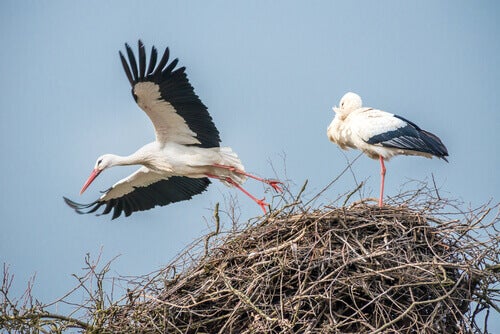 Storks are internationally famous for being responsible for delivering babies to their respective parents. However, despite this folklore, most people know very little about these birds. So, that’s why we want to take advantage of this space to tell you about the habitat, diet, and behavior of storks.

The stork: Physical characteristics and taxonomy

Storks are large, slender birds that are part of the wading group, which includes numerous species. The main characteristic of this group of birds is the shape of their stilt-like legs. These physical characteristics allow them to walk safely in regions of shallow water, such as the banks of rivers, lakes or ponds.

They exhibit a slender body, covered by an abundant and soft plumage that’s usually black and white. Also, they have a large S-shaped neck and a head that’s small in comparison to their long, thin body. Its beak is pointed, narrow, and elongated.

The habits and behavior of storks

The behavior of storks on land can appear clumsy to our eyes. Their long wading legs give them a slow, stiff, and somewhat awkward gait. Nevertheless, when they take flight, these birds display great speed and remarkable elegance, showing off their beauty as they cross the skies.

When it’s time to go to sleep, storks adopt a very particular pose that’s typical of wading birds. They bend one of their legs and tuck it close against the body, maintaining perfect balance with the other. The leg that remains on the ground remains stiff and straight until the stork wakes up.

The diet of storks

Like the vast majority of birds, storks maintain a very varied diet. They usually consume any species of small animals that live in swamps, ponds, lakes, rivers, etc. Their daily diet depends on the availability of local food, the time of year, their age, etc.

It uses its sharp, strong beak as a kind of harpoon to capture and overcome its prey, as well as to dig in the ponds. And, if food is scarce, storks can also consume human food waste, garbage, or carrion. In this sense, they’re very resourceful birds.

The habitat of storks

The natural habitat of storks is in shallow water environments. These birds can live in wet meadows, on the banks of rivers and lakes, near ponds and puddles, or in wetlands.

However, storks often build their nests on high ground to ensure the well-being of their young. Usually, they prefer to locate them in the high branches of strong and leafy trees. Often we can find stork nests in the bell towers of churches or other high towers.

Upon returning from their migration, they return to their original place for several summers to begin a new reproductive stage. Usually they reinforce their nest before the arrival of new chicks.

In many countries, storks are protected by law and it’s forbidden to touch their nests, even when they’re out of use. By moving them, we can interfere with the stork’s reproductive cycle and thus threaten the continuation of its species.

The behavior of storks: Migration

Storks are migratory birds that, with the arrival of low temperatures, must undertake a long journey in search of heat and a new habitat. During the fall, these birds fly mostly to southern Africa where they find abundant food and a warm climate.

In their journey, they cross the Strait of Gibraltar and the Sahara Desert until they reach their destination. It’s estimated that they can fly more than 100 kilometers (60 miles) per day. However, when the high temperatures approach in the African continent, the storks prepare to summer in Central or Eastern Europe.

Migration is a fundamental aspect of the behavior of storks, as it allows for their survival and reproduction. We must remember that domestic possession of this species is prohibited.