Throughout history, many animals have been associated with legends and superstitions. In today's article, our lucky bird is the stork. 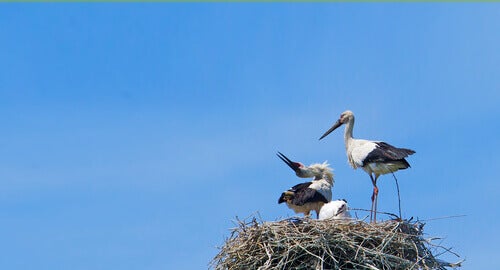 Storks are long-legged birds of the order Ciconiiformes, which also includes herons and flamingos. Moreover, all of them are characterized by the length of their bills, neck, and legs. They’re migratory birds and travel long journeys throughout their lives. In addition, people often say they carry good luck wherever they go. This is why many know them as lucky birds.

However, they’re often persecuted and their nests are destroyed because they’re “dirty” or are “in the way”. As a result, these birds that were once welcomed on building tops are now despised. Today, we’ll tell you all you need to know about these important and majestic animals.

Generally speaking, the stork is an easily recognizable bird. This is because it’s a large bird, with a long wingspan and its characteristic white plumage. Their bills are long and pointy, with a very intense orange color in adult storks, reddish for juvenile storks, and almost black for young chicks. Their legs also have that intense orange-reddish color in adult birds.

The white stork is a fairly silent bird. However, they do vocalize while in mating season or when they feel threatened and will do so with raucous, loud tones. The most characteristic sound of this species is its bill-clattering.

They produce it by quickly opening and closing their beak so as to make a knocking sound when its beak closes. In addition, they emit these sounds in different kinds of social interactions, like during the mating season.

Bringing good luck to the world

The white stork leaves the African region of the Great Lakes in February every year, where it spends winter time. It will then fly in flocks heading for Europe. However, if the flock happens to encounter a cloud of locusts, this will interrupt their journey as locusts are their main source of food. Eventually, they’ll continue on their thousand-mile journey up north.

Some curiosities about these lucky birds

When we talk about good luck storks, we usually refer to Ciconia ciconia, the species that has that characteristic white color. Few birds are as familiar to us as these and they’re so popular in human cultural traditions. Unlike its black relative, the white stork has people’s sympathy. This is why people have associated them with towns and cities, thus enjoying the protection and even food.

However, this species has had to endure a drastic change in their rural landscape in recent decades, like in Spain for instance, where it used to live in large numbers. This has led to its disappearance in many regions of the country.

Are they really considered birds that bring good luck?

On the European continent, these birds have always been welcomed everywhere. Traditionally, people would prepare platforms on their rooftops so they could build their nests on top. In addition, in many countries such as Germany or Denmark, people still consider them a symbol of good luck.

For centuries, people have associated storks with the arrival of babies, thanks in part to a folk tale by Hans Christian Andersen. However, this is also due to their usual presence on rooftops. Apparently, this gave parents an escape route to a “somewhat embarrassing” situation when it comes to explaining to the children where they come from.

Another of the miracles attributed to these birds is their arrival to a village at the beginning of spring. This is why they have become a symbol of happiness and good fortune. For a Dane, for example, the return of the storks signals the end of a cold and harsh winter. Something that isn’t so reliable today since, thanks to climate change, these birds are arriving sooner than before.

Nevertheless, tradition shows how people would place all kinds of contraptions on the roofs of buildings to make it easier for these birds to build their nests.

The average citizen is generally annoyed by wild animals that roam in cities. Maybe because of the noise they may produce or possible illnesses they may carry, or accidents they may cause. Nevertheless, this is something we must change.

While maybe in the past this species has been preserved because of superstition, it’s important to know how crucial it is for nature’s biodiversity.

Storks, like many other birds, are a protected species during their breeding season. This is perhaps what annoys people in urban areas the most because they nest at the building tops. As a result, they often do this in historical buildings, such as churches and bell towers, and even on electrical towers. This can certainly lead to safety issues due to falling branches, power outages, or urban material deterioration.

This is why we need to create methods that restore the good relationship that existed between humans and these birds. By honoring and respecting the natural ecosystems, we can prevent them from invading our cities, and the more space we give them, the more they’ll take care of the environment in return.

All About the Conservation of the Black Stork
The black stork is an emblematic bird and not as well known as the common white stork. Don't miss this article to discover more about its conservation. Read more »
Link copied!
Interesting Articles
Birds
Discover 5 Different Types of Owls