The Characteristics, Behavior and Habitat of the Common Pheasant

This bird belongs to the Phasianidae family and stands out for its coloring and beautiful feather pattern. Keep reading to discover more about the characteristics, behavior, and habitat of the common pheasant. 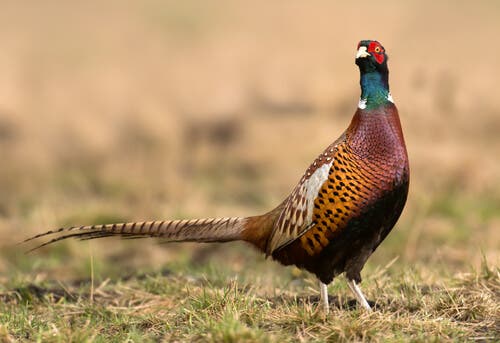 The common pheasant is an extravagant bird of Asian origin whose scientific name is Phasianus Colchicum. It belongs to the landfowl order and possesses very peculiar characteristics, including picturesque colors and a slender silhouette. This bird inhabits the great forests of the world and is especially common in Europe. Keep reading to find out more about its characteristics, behavior, and habitat.

The characteristics of the common pheasant

The males measure approximately 3 feet tall and weigh a little over 2 and a half pounds. Compared to females, their plumage is brighter and more striking, with a mixture of bright colors. These include red, yellow, as well as shades of blue, green, and brown.

These birds change their features during the first two months of life, generally in September. And, by the time they reach the age of one, they can reach full size and grow their permanent feathers. In this same time period, they also reach sexual maturity.

Female pheasants however are considerably smaller. They measure an average of 2 feet and their approximate weight is just below 20 pounds. As for their plumage, it includes various shades of brown.

These subtle differences allow us to easily distinguish between males and females of the common pheasant species. However, they also have many characteristics in common. For example, both have a small, round head with a bone structure that’s, for the most part, similar to a hen’s.

The common pheasant stands out for its long slender tail as well as its gray legs. It’s a very agile and majestic animal. As for its wings, they are round, wide, and short, allowing them to fly vertically. However, they can only reach a height of about 30 feet and only for a few seconds.

The behavior of the common pheasant

The common pheasant is both a polygamist and a gregarious bird. In other words, it has more than one partner and lives in a community. What’s more, it’s a land animal, meaning that it spends most of its time walking and running freely. However, as we mentioned, it also has the ability to fly short distances.

The speed of this bird is between 25 and 40 miles per hour. However, if they feel that they’re in danger, then they can increase their speed significantly.

These birds are intelligent and can quickly identify human beings as a threat. What’s more, they tend to be very astute and avoid being hunted. However, common pheasants that live in captivity don’t show a fear of humans, although they’re usually aggressive towards their keepers.

The common pheasant grows and develops best in open fields with grains that they can eat. They’re experts at roaming the ground, and take frequent dirt baths. Another typical characteristic of these birds is that they climb trees in order to sleep, as this gives them a sense of protection.

The reproduction of the common pheasant

When it comes to the reproduction season of the common pheasant, it begins in March and April. During this time, males start to defend their territory by moving their wings and singing. Females lay around 14 eggs and have an incubation period of between 23 and 25 days. Finally, during May and June, the chicks are hatch from their shells.

These birds feed on plants and the remains of other animals. Insects, worms, snails, seeds, fruits, and leaves make up an important part of their diet. It’s interesting to note that the meat of the common pheasant is very valuable in the world of gastronomy. That’s because of its smooth texture and low-fat content.

The habitat of the common pheasant

These pheasants tend to live in areas near hunting lands. In order to reproduce freely, they tend to frequent countries that possess two key elements. First, prairies that are close to ponds or lakes and, second, forests with vegetation close to the grounds.

You can find these pheasants in the cultivated lands and thickets all over Europe. In fact, there you can observe all the specimens that originate from diverse regions of southern Russia, as well as Asia. Pheasants are the most widespread game bird in the world, as they also inhabit North and South America.

They tend to inhabit nests that they build on the ground. In general, they’re located among the vegetation of rural lands or on the borders of forest areas, just below the trees.

As you can see, this bird is closely related to hunting. Therefore, many animal defense groups are seeking the release of the beautiful pheasant into nature to promote its conservation.

The Quetzal: An Iconic South American Bird
With its bright green iridescent feathers, the quetzal has become an iconic species, and is greatly admired all over the world. Read more »
Link copied!
Interesting Articles
Birds
Discover 5 Different Types of Owls