This bird is known for their long migration routes and for travelling in flocks of up to 400 individuals. 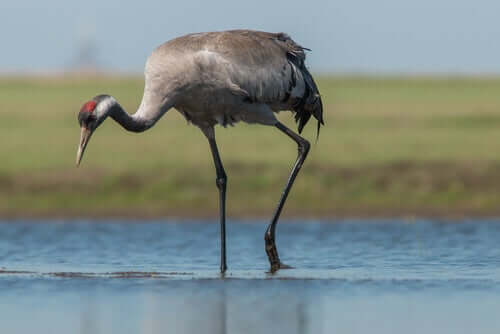 The common crane is a large migratory bird that spends its life traveling between Eurasia and Africa. With its long legs and neck, it’s truly beautiful to see in flight. In this article, we’ll tell you all about the common crane’s characteristics, behavior, and habitat.

Characteristics of the common crane

Common cranes belong to the Grus genus of the Gruidae family and are known for their large size and bearing. They can measure over four feet tall and their wingspan can reach eight feet.

Most of their body is covered in a gray plumage although there are darker patches on their back and above the tail. The interesting colors are on their head, where you can see different shades of red, white and black. This is what distinguishes them from other species of crane, such as the black-necked crane or the hooded crane.

The males and females look fairly similar. Only younger cranes have a different appearance when the tips of their feathers are a more ochre color. As it happens, their feathers molt twice a year. This takes six weeks, and during this time, they are unable to fly.

Depending on the time of year, this majestic bird lives in Europe, Asia, and North Africa. It’s particularly found in Greece, Romania, Germany, Vietnam, Burma, Thailand, Tunisia, and Sudan.

The common crane has a reputation as a great traveler. In a single year, they can fly thousands of miles and cross no fewer than three continents. They prefer snow forests, located over 7,000 ft above sea level, or the colder areas of Europe close to swamps, ponds, lakes, or lagoons.

They look for quiet environments and avoid contact with people, although it’s possible to see them in crop fields during their migration period. When they’re shedding their feathers and are unable to fly, they normally stay in waters with plenty of vegetation to hide in.

Behavior of the common crane

The common crane is a gregarious bird. This means that they group together or work with others towards a common goal. During their migration journey, they fly in a ‘V’ shape and change their position from time to time. This prevents the ones at the front from getting too tired.

This grouping together doesn’t just happen during migration. It turns out that they can flock together in groups of up to 400 when taking rest stops or if they find a good supply of food.

The common crane is an omnivore and can feed on land or water thanks to its special beak. They mainly eat plants, such as roots, stems, leaves, fruits or seed, and small animals, such as crabs, worms, amphibians, insects, or spiders. The latter form part of their diet during the mating season.

Speaking of mating, the common crane is a monogamous animal. This means that they stay with the same partner for life. If one of them dies, then the remaining crane will look for another partner the following season. Each spring, they carry out a very eye-catching courtship ritual that includes dancing, spreading their wings, and throwing vegetation into the air.

The pairs choose quiet places next to water or among plants to build a nest using stems and leaves. This same shelter can be used for several years if it hasn’t deteriorated or been destroyed.

Once the nest is ready, they lay two eggs and incubate them for a month. The female takes charge of this while the male goes out to look for food.

The Agami Heron: Habitat and Characteristics
Today we're going to tell you about the agami heron, a unique species of bird that we don't know much about because of its difficult-to-reach habitat. Read more »
Link copied!
Interesting Articles
Birds
Tips for Raising Domestic Turkeys