The Cunning Cuckoo and Its Relatives

"One Flew Over the Cuckoo's Nest" uses the name of these birds because of their somewhat sinister history. Do they deserve their reputation? Are all cuckoos the same? Today, we'll tell you about the cunning cuckoo and its relatives. 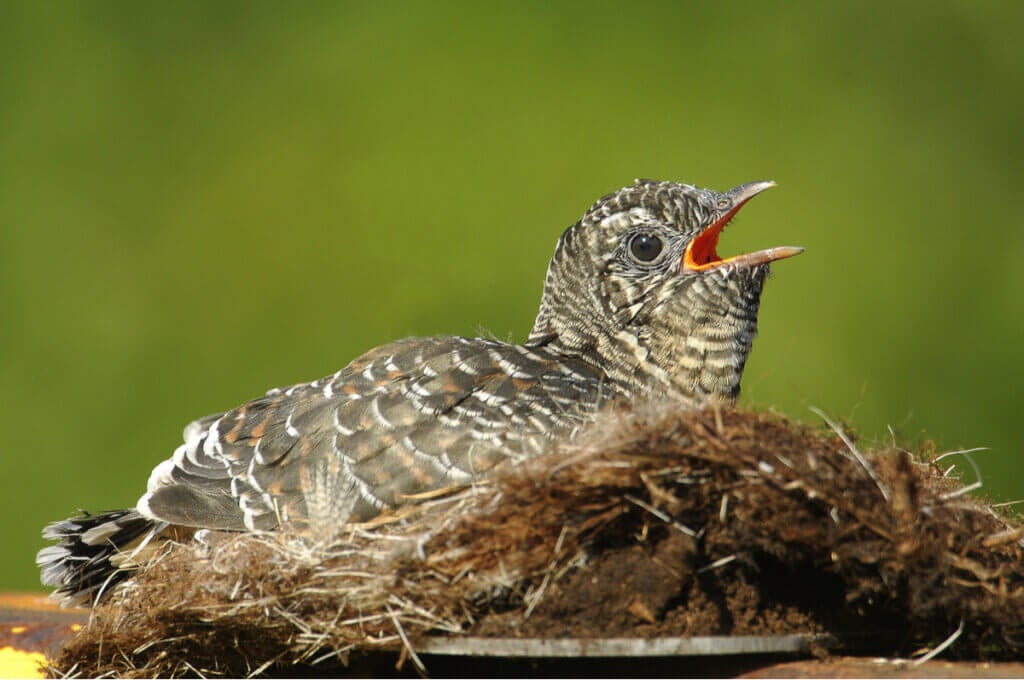 Cuculids are birds that belong to the family Cuculidae, which includes the cunning cuckoo and its relatives. They’re mostly tree-dwelling birds, although some species carry out terrestrial lives and develop legs rather than wings. For example, this is the case with the roadrunner.

Besides their morphological characteristics, what makes some members of this family even more special is their parasitic nature. In particular, cuckoos are known for being brood parasites, which means that they lay their eggs in other birds’ nests.

Cuculus canorus: The most cunning cuckoo

There are many species of cuckoo in the world. However, only those living in Eurasia and Africa have the ugly habit of evicting other birds from their nests in order to lay their own eggs.

Cuckoos in the Americas build their own nests and take care of their chicks. It’s the Europeans who prefer to entrust their offspring to the care of other birds, like larks, warblers, wrens, robins, and many other examples of affected passerines.

The choice of the mother family depends on the color of their eggs. The different varieties of cuckoo have been able to evolve so that their eggs resemble those of the parasite species. This prevents the risk of rejection by the “adoptive mother” as much as possible.

General curiosities about the cunning cuckoo and its relatives

The common cuckoo (Cuculus canorus) is a migratory bird, herald of spring and quintessential parasite of other birds. It’s the bird that we know in common language as the cuckoo, because that’s what its song sounds like in the woods with the arrival of the floral season.

In fact, this bird abounds in the Black Forest of Germany, the country where the cuckoo clock was invented. Coincidence?

What exactly does it mean to be a nidoparasite?

The amazing way in which the cuckoo ensures the survival of its young is well known. The female watches certain birds build their nests, and waits until the mother lays an egg.

Then, the squatter takes advantage of her absence and approaches the nest to get rid of the other’s egg. She then lays her own egg and moves away, before the other female returns, who will unknowingly raise a chick that isn’t hers.

Sometimes the “adoptive mother” realizes the deception and leaves the nest. But, more often, she accepts the cuckoo’s egg as her own and incubates it with the rest.

The baby cuckoo hatches after about 12 days, often before its nest mates. It uses this advantage to throw everything around it over the edge.

It’s perhaps this custom that has given the cunning cuckoo a bad reputation for generations. Even so, the harsh reality is that the rest of the chicks would have no choice but to compete with a “sibling” that grows faster and takes all the food provided by the mother.

The cunning cuckoo and its relatives: How does the young cuckoo get control of the nest?

The young cuckoo tries to get an egg or a chick on its back, between its wings. It then lifts the egg or the unfortunate bird to throw it out of the nest, or pushes it with its legs towards the edge to toss it over. The baby cuckoo repeats the task as many times as necessary.

A collective expulsion, however, requires a sovereign effort and it takes several days to complete the feat. The bird may even fail in the attempt. If it succeeds, the chick grows so fast that, in a short time, it’s ready to fend for itself. After 3 weeks, the “little one” can leave the nest and fly away.

What about the rest of the species in the Cuculidae family?

The Old World cuculids are the only birds considered to have parasitic habits. In addition to the common European cuckoo, there’s the great spotted cuckoo (Clamator glandarius). It lays its eggs in the nests of birds such as magpies and starlings.

Beyond the most well-known examples, it’s the non-parasitic cuckoos that attract the most attention. They usually build their own nests and both parents incubate and feed the chicks. Next, we’ll talk about two more species: the ani and the roadrunner.

Crotophaga ani, the most social relative of the cuckoo

The Ani is a bird native to the Americas. It’s a gregarious species that lives in a community and, although it forms breeding pairs, it’s always found in noisy groups. These groups tend to occupy territories in open fields and cultivated areas.

These birds also fly in flocks of about 20 individuals and don’t separate when raising their chicks. They build large nests of common use for the whole group, where several females lay their eggs and incubate them at the same time. Meanwhile, the rest of the anis are completing the construction or repairing it.

The geococcyx is better known as the roadrunner, a bird spread throughout the dry and desert lands of the United States and Mexico. As every child knows, the roadrunner is a bird unsuitable for flight, but famous for the speed it develops.

This animal can reach 15 miles per hour. Its short, sturdy legs move so fast that they seem to not even touch the ground, hence the idea of its unusual speed.

As you may have noticed, not all cuckoos use parasitism to develop. The roadrunner and the ani are both living examples of this.

Discover These 5 Birds That Don’t Fly
Today, we invited you to discover 5 birds that don't fly, species have adapted to the environment in which they live. Read more »
Link copied!
Interesting Articles
Birds
The Bali Myna: A Beautiful Critically Endangered Bird