With its bright green iridescent feathers, the quetzal has become an iconic species, and is greatly admired all over the world. In fact, the Aztecs believed it was an incarnation of the god Quetzalcoatl. There are five different species in total, all native to America. 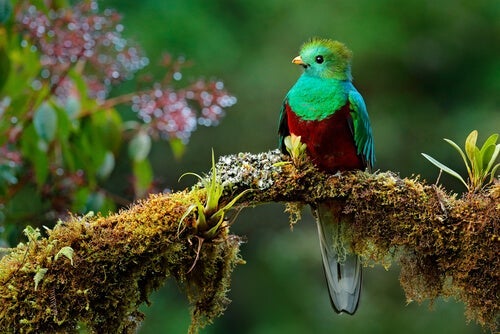 The quetzal is one of the most iconic species in Central America, and is famous for its connection to the Aztec god, Quetzalcoatl. Because of their bright green plumage, many people believe them to be one of the most beautiful birds in the world. Although they’re not at risk of extinction, the destruction of their natural habitat is beginning to threaten the resplendent quetzal.

The legend of Quetzalcoatl

The quetzal gets its name from the legend of Quetzalcoatl. Quetzalcoatl was a Mesoamerican deity who was worshiped from around 1 B.C. until 1500 A.D. The name Quetzalcoatl means “feathered serpent” in Nahuatl, the language of the Central American Aztecs.

Quetzalcoatl was one of the most important gods in Aztec mythology. Rulers and nobles wore headdresses made from the quetzal’s bright green feathers, which were believed to connect them to their god. Killing quetzals was a crime. They obtained the feathers by catching the birds, and plucking the long feathers from their tails before releasing them back into the wild.

Quetzals are members of the family Trogonidae, genus Pharomachrus. According to the Encyclopedia Britannica, these birds mainly live in forests, from southern Mexico all the way to Bolivia.

Quetzals can be recognized by their long tails and iridescent green feathers. They mainly feed on insects and fruit, and spend most of their lives up in the trees.

There are five different species of quetzal, all of which are native to the American continent.

This first species is famous for its vibrant green feathers, which contrast greatly with its golden head. They’re common in both Central and South America, where they live in humid rain forests. They mainly feed on fruit and, to a lesser extent, insects. Like other quetzals, they’re solitary birds, and only come together during breeding season.

This species mainly lives in humid forests along the Caribbean coast of Guyana, Colombia and Venezuela. Like other quetzals, only the males bear the species’ distinctive markings: a golden yellow beak and bright green feathers. Again, they also feed on fruit, berries, and insects.

The crested quetzal lives in the pristine forests of the Andes, living at altitudes of between 4000 and 10000 ft. The male’s head and neck are turquoise, while their bodies are a bright red.

Just like other species of quetzal, the females are fairly dull in color, with brown and green feathers. Male crested quetzals can be distinguished from other species by the crests on their heads, which start just above the beak.

Also known as the peacock trogon, the pavonine quetzal looks most different from the famous resplendent quetzal. It’s native to the Amazon basin between Venezuela, Colombia, and Bolivia. It’s the only one of its kind that lives to the east of the Andean mountain range.

They have brightly-colored feathers, especially the males. The males also have bright red beaks, while the females have gray beaks.

And finally, the resplendent quetzal is probably the most famous species, and is native to Central and South America. In fact, it’s also the national bird of Guatemala, even giving its name to the country’s currency. There are two subspecies: P. m. mocinno and P. m. costaricensis.

They have iridescent green feathers on their bodies, and red chests. Depending on the light, they may glow green, blue, yellow or cobalt. You can identify them by their long tails, which measure more than 23 inches in length.

A species at risk

Of the five species, four are not considered at risk. Today, the resplendent quetzal is listed as “near threatened” by the International Union for Conservation of Nature (IUCN).

Likewise, the US North American Bird Conservation Initiative (NABCI) has also placed the resplendent quetzal on its Watch List, making it a species of major concern in terms of conservation.

Today, the greatest threat to these birds is habitat loss. Deforestation, habitat fragmentation, and logging pose the biggest risks to the resplendent quetzal.

Jacamar Bird – Characteristics of a Passerine
The jacamar bird is the better-distributed species of the Galbulidae family. Jacamars is a general term for a group of birds that belong to this family. Read more »
Link copied!
Interesting Articles
Birds
Discover 5 Different Types of Owls