The Role of Vultures in the Ecosystem

Vultures are birds that feed on what's known as carrion--dead animals. This meat would otherwise enter into a process of advanced decomposition that would contribute to the propagation of infectious illnesses. Today, we'll take a closer look at the role of vultures in the ecosystem. 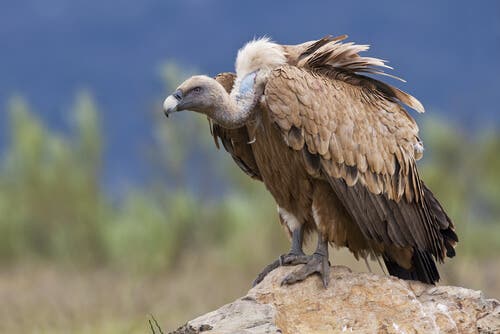 For some people, vultures can seem like very unpleasant creatures, given their size, peculiar appearance, or eating habits. Just the same, these birds are actually essential in guaranteeing balance in the environment. Below, we’ll invite you to discover the main characteristics and the role of vultures in the ecosystem.

Vultures are large birds of prey that belong to the Falconiformes order. They are gregarious by nature, meaning they live in flocks. As for their appearance, these scavengers are characterized by their size, with a hood-shaped beak and resistant feet. Some species of vultures can measure over 6 feet, with an average weight of between 13 and 22 pounds.

Unlike the majority of birds of prey, like eagles and falcons, vultures have flat feet. This makes it difficult for them to trap or eat live animals, and nearly impossible to perform hunting maneuvers. It also explains why vultures tend to feed almost exclusively on the meat of decomposing animals.

Most people tend to find the appearance of vultures to be unattractive. First, their plumage is inconspicuous, in tones of brown and beige, and their heads tend to be bald. In addition, many adult vultures develop rosy flesh around their necks and heads. However, despite their unpleasant appearance and habits, the role of vultures in the ecosystem is fundamental.

These birds demonstrate great physical resistance and a noteworthy ability to adapt. That means we can find vultures living in forests, deserts, savannas, or on very isolated cliffs. In fact, American vultures occupy territories from northern Canada all the way down to the southern tip of Argentina.

The different species of vultures

There are more than 20 species of vultures in the world, divided into two large families: Cathartidae and Accipitridae.

Cathartidae vultures are often referred to as “New World vultures” because they inhabit the American continent. Among this family, there are 7 different species, which are the following:

All other vultures belong to the Accipitridae family and occupy every other continent except Oceania and Antarctica. Among this family, there is a long list of known species, among which we can mention the following:

The important role of vultures in the ecosystem

As we’ve mentioned, most people find these birds to be extremely unpleasant. Just the same, vultures are a crucial bird when it comes to maintaining balance on our planet. In the environments where they live, the role of vultures in the ecosystem is fundamental.

If it weren’t for vultures consuming this decomposing meat, it would become a dangerous focal point of illnesses and infections. Of course, it would be impossible for human beings to clear and sanitize each tiny corner of this immense planet. Fortunately, by nature, vultures fulfill a cleaning function that, among other things, prevents the spread of many zoonotic diseases.

The conservation status of vultures

Unfortunately, a growing number of vultures die of poisoning as a consequence of consuming contaminated meat. This occurs when an animal consumes a toxic substance, dies, and then a vulture eats it. The poison then spreads directly to the bird through the ingestion of contaminated blood and tissue.

This phenomenon is frequent in countries where wild animals commonly enter urban and rural areas. For example, in India, Nepal, and Pakistan, where animals often enter cities in search of an easy meal. There, due to ignorance or hunger, they may consume cleaning products, rat poison, or other toxic substances.

The excessive encroachment of human civilizations upon the natural habitat of numerous species causes harmful consequences to the environment. And that’s what happens when we interfere in the role of vultures in the ecosystem. In doing so, we contribute to the accumulation of decomposing organic material.

The interference of man in the normal development of nature has its consequences. Among them, the dissemination of an enormous amount of severe pathologies and contamination in general.

The Marabou Stork: A Great Scavenger
The marabou stork is a carrion bird of the Ciconiidae family. In fact, they're the largest member of this family and also some of the largest flying birds. Read more »
Link copied!
Interesting Articles
Birds
5 Species of Geese