Today we want to tell you about one of a kind animal that mates for life and survives on bone marrow. Continue reading to discover the bearded vulture. 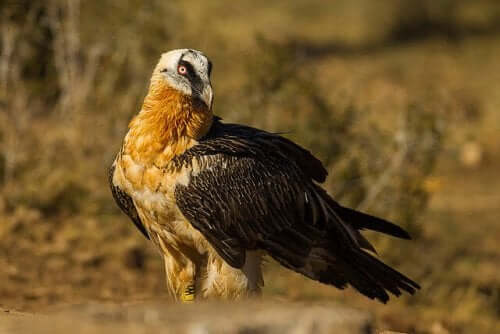 Formerly known as the ossifrage–or bone breaker–the bearded vulture is a peculiar bird and we want to tell you all about it. Want to know why? Keep reading to find out!

The bearded vulture, all you want to know

How does a bird come to be known by a name as interesting as the “bone breaker”? This vulture just so happens to have the habit of trapping its prey–be it an animal, bones, tendons, or shells– and throwing it forcefully against the rocks several times. The bird does this in order to destroy them and make them easier to eat.

Obviously, these vultures can do this thanks to the fact that they have strong beaks with great power to throw things. Therefore, they can destroy anything that comes their way. In fact, they can even turn their food into dust.

And if that weren’t enough, the bearded eagle has a sort of resistant callosity on its tongue. This is a handy tool since this bird actually prefers to eat bone marrow over meat. It uses its tongue to extract its prey’s bone marrow in one go. It sounds horrific!

While the bearded vulture may, on occasion, go after live prey, like other vultures, it’s a scavenger. In other words, it feeds mostly on the remains of dead animals.

Characteristics of the bearded vulture

This is a very large bird that can have a wingspan of between 7.6 and 9.3 feet, and can weigh up to 15 pounds. Its tail has the shape of a rhombus and its plumage generally consists of two tones of brown, which can be dark or light. Just the same, in the young bearded vultures, their feathers are black, especially on their head.

On their faces, they possess a black stripe that has the appearance of a mask, a characteristic that helps set them apart from other vultures. What’s more, these birds may also have black feathers in its neck area, which come together at the front like a sort of beard.

The behavior of the bearded vulture

Monogamy isn’t common in the animal kingdom, but the bearded vulture is one of the exceptions to the rule. It’s a faithful animal that seeks out a mate and stays by her side for the rest of its life. The females of this species prepare a number of protected nests and, when the time comes, choose which one to use. They lay eggs just once a year.

Although females come into heat during the fall, their young are born in the winter. It’s interesting to observe that these animal parents act as if they were a married couple. We say this because the male participates in the incubation of the eggs. Therefore, it’s common to see male vultures incubating their eggs and even caring for the young once they’re born!

This care for young vultures extends for a period of 4 months, which is when they should begin to learn to fly. Of course, this takes time. In fact, it can take between 95 and 247 days for young bearded vultures to master the skill of flying.

The diet of the bearded vulture consists of bones. In fact, it’s the only species known to feed on bones in order to survive. To be precise, these animals need to consume between 9 ounces and a pound of bones each day. This type of feeding is known as osteophagy.

The habitat of the bearded vulture

This feathered animal inhabits the mountains and forests of Europe, Asia, and Africa. However, in some places, it’s in danger of extinction. The death of these birds is the result of the ingestion of toxic products, shooting, and electrocution from electricity lines.

There are many hunters that place bait on the ground in order to trap other prey, and by mistake end up trapping one of these vultures. Even though it’s unintentional, many countries consider this action punishable by law. In fact, NGOs battle on a daily basis to make these laws stricter in order to preserve this species.

So, now you know all about the bearded vulture and have observed its beauty and discovered its modus operandi. Now, wouldn’t it be a pity for this bird to disappear?

Learn About 10 Interesting Meat-Eating Animals
With a bit of research, we find out that carnivore or meat-eating animals are all over the animal kingdom. Learn more about them in this article. Read more »
Link copied!
Interesting Articles
Birds
Discover 5 Different Types of Owls