The Rufous-Vented Chachalaca: A Bird of the Tropics

The rufous-vented chachalaca is a bird that's endemic to Columbia, Venezuela, and Trinidad and Tobago. It possesses discreet feathering and a strong voice. This species contributes to the dispersal of seeds and, is, therefore, considered a participant in forest regeneration. 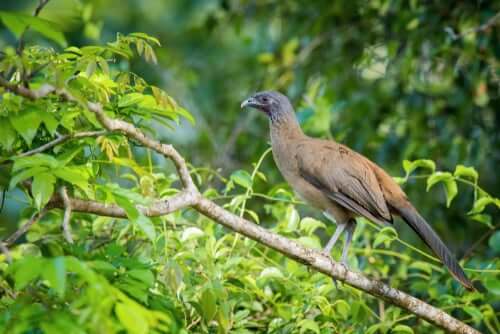 The rufous-vented chachalaca (Ortalis ruficauda) is a tropical bird of the landfowl order. This species is a member of an ancient group of birds from the Cracidae family, which includes 50 species and is related to megapodes. Megapodes, also known as mound-builders, are inhabitants of Australia.

Distribution of the rufous-vented chachalaca

The rufous-vented chachalaca lives only on the American continent. It’s endemic to neotropical regions, including northeastern Columbia and northern Venezuela. You can also find this species on the islands of Trinidad and Tobago, where they are one of two of the country’s national birds.

The rufous-vented chachalaca resides among the deciduous shrubs, gallery forests, and forest patches in the lower, dryer lands of northeastern Columbia, northern Venezuela, and Trinidad and Tobago, as we mentioned earlier.

In Venezuela, chachalacas don’t generally inhabit the depths of the humid forests. Rather, they prefer bushes, thick borders, and low forests that are located in the driest parts of the tropics.

As for their size and appearance, these birds are similar to hens and pheasants. They have small heads, long necks, and a body with large, strong legs, and a tail that’s relatively long. What’s more, they emit low, resounding sounds.

This species possesses opaque and discreet feathering. Its predominant colors are grey, brown, and black, which helps it disguise itself among branches and the ground. The females among this species also have a dark brown morphology with a portion of their body being light brown.

Habits of the rufous-vented chachalaca

Chachalacas are, for the most part, daytime birds. They are most active in the early hours before sunrise, a time that they spend making their loud calls.

These birds prefer to build their nests in trees. For the most part, they feed on fruits and grass, and also consume soft fruits, seeds, flowers, green sprouts, and leaves. Thanks to their fruit-eating habits, these birds are excellent spreaders of seeds. Therefore, they’re very important when it comes to the regeneration of forests.

Recent studies have categorized the rufous-vented chachalaca as a bird which is vital to forest conservation. What’s more, they are a social species and tend to gather to look for food in groups of 4 to 10 birds.

The rufous-vented chachalaca tends to rest during the hottest hours of the day. Of course, their resting place is always within the trees. At the same time, they bathe in the dust, which experts believe helps them deal with external parasites. However, it may also be part of the way in which they court potential mates.

It’s worth pointing out that these birds are monogamous, meaning they mate for life. What’s more, they tend to nests in trees, and both males and females participate in the building of these nests. During the period of reproduction, these birds can be territorial.

In general, a female will lay two white eggs which she will incubate on her own. Babies are  born with the immediate instinct to climb and seek shelter in the nesting tree. Within a few days after hatching, they develop the ability to fly.

The call of the rufous-vented chachalaca

Many chachalaca specimens make extremely loud noises. They possess a very large trachea that guarantees that its calls will be heard from over a kilometer away.

In general, flocks of rufous-vented chachalacas make their loud calls as a choir. In their songs dominate a multitude of crows, shouts, and quacks.

The state of conservation of the rufous-vented chachalaca

Traditionally, members of the Cracidae family have been hunted in rural villages of the neotropics. This is because of their large size in comparison to other forest birds. At the same time, the growing deforestation of their natural habitat also impacts the accelerated decline of local Cracidae populations in all of Latin America.

One factor that can favor the conservation of this species is the fact that it’s becoming an important species in the ecotourism industry.

Amazing Animals that Live in the Jungle
Did you know that animals that live in the jungle make 57% of the world's animal population? In this article, we'll you about some of the most amazing ones! Read more »
Link copied!
Interesting Articles
Birds
Diurnal Birds of Prey, Rulers of the Summits