This bird has very varied sounds, and each has a different function; the usual one is the call, although its 'language' or way of communicating is varied, and is done through different peculiar 'notes' 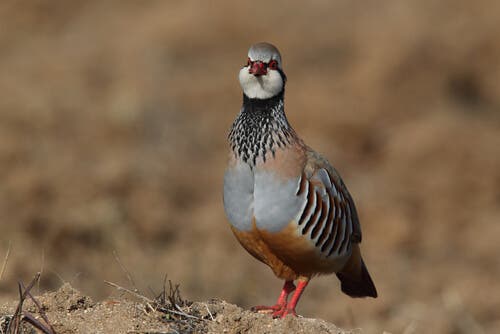 Well-known partridge songs are very appreciated among experts and lovers of the wild bird kingdom. This little bird makes very particular sounds, which makes its natural song unique and attractive.

Birds emit various sounds that perform different functions in their communication and social positioning. Therefore, when we say ‘the song of the partridge’, we’re referring to the most recognized type of song that this species emits.

In this case, the partridge’s typical sound that allows us to easily identify it is the so-called ‘call’. It’s a very powerful sound, from which the bird shows its strength, power, and personality. This sound would perform a function similar to a presentation. An adult partridge’s call usually has three to eight strokes, and is very easy to recognize.

Partridges are recognizably very vocal birds that emit a great range of characteristic sounds. Below is a summary of the different sounds and their functions:

One of their songs can be considered a repetitive emission. This is the sound that partridges make when feeding and is very similar to a “gu-gu, gu-gu, gu-gu…”.

Field partridges see it as a sign that they can come and feed with peace of mind.

Partridges have another song that they use when they recognize a threat and to alert and/or ask for help. It’s fast and effective. Other partridges will immediately be still and silent upon hearing it.

Many experts consider this final song the most unpleasant partridge song. It sounds like “ach, ach, ach, ach, ach…”, that they broadcast repeatedly and in a very exasperating way. Partridges use it to express irritation, anger, or discomfort.

In addition to the above sounds, we must mention the ‘silence’ that marks the pauses in partridge songs. Just as we perform very expressive pauses in our verbal and body language, partridges alternate their social communication with these ‘silences’.

Learn How to Identify a Bird Song From Home
Even in urban spaces, a bird song has always been part of our lives. However, between the sounds of traffic we have in our routines, we hardly notice them. Read more »
Link copied!
Interesting Articles
Birds
Lesser Kestrel, the Smallest of the Falcons