The Characteristics and Significance of Matriphagy

Did you know that some animals eat their mothers after they are born? Matriphagy, as shocking as it may seem, is a strategy that makes clear sense in the animal kingdom. 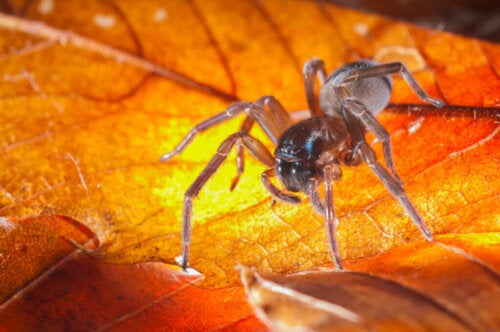 Some parents would give their lives for their children. In fact, these kinds of altruistic paternal behaviors are present both in the animal kingdom and in most human societies. Even so, there are extreme parental strategies that go far beyond protecting the offspring and this is the case with matriphagy.

Parental care and its relationship to offspring

Parental care is defined as any parental trait that increases the chances of offspring survival, and their reproductive viability. This mechanism is present in both behavioral and non-behavioral traits.

In addition, parental care isn’t a process that comes for free, because in all cases parents must share precious resources and energy from the very beginning. Every bite they give to their offspring is one they don’t have for themselves. Thus, it manifests in animals such as:

Offspring is an investment for parents as they must limit their own possibilities of future survival and reproduction in order to provide the best possible future for their children.

Matriphagy is the most extreme type of parental care. In fact, this kind of animal eats its own mother. This behavior mainly takes place in invertebrates and in the caecilians, a group of amphibians.

This process isn’t complete in the latter because the mother doesn’t die as food to her little ones. Female caecilians allow their offspring to feed on their oviduct tissue, which causes damage but doesn’t end their lives.

This small-sized spider is distributed throughout Europe and North America. Beyond their image, common to many arachnids, the main characteristic of females of this species is their extreme altruism towards their offspring.

In this case, a female keeps the ootheca (egg sac) until the young emerge from it. She first lays the second batch of eggs to feed them, and then encourages them to feed on her own body. The hatchlings inject their venom into the mother’s body and so she dies quickly.

The benefits of this strategy to the hatchlings are more than clear. Some of them are:

It’s clear that offspring benefit from this behavior in multiple ways. What’s in it for the mother, though? A scientific study tried to answer this question by separating the offspring from the mother before they devoured her in laboratory conditions. The results were:

As you can see, these results indicate the female is no longer viable after giving rise to the first generation of offspring. Why bother to do so if the chances of survival of the second batch of eggs are so low?

A matter of genes

In the end, genetics has an answer for all evolutionary strategies. Most animals don’t perceive themselves as autonomous entities (or, at least, they haven’t been shown to), so their primary concern is for their genes to live forever.

Now you know why some parents will give their lives to protect their offspring, some even let them eat them alive so they can thrive. Matriphagy is a shocking concept to a human being but it obviously has a clear evolutionary purpose.

”My mother never breast fed me; she told me she only liked me as a friend.”

Anergates Atratulus Ants and Their Incredible Behavior
Nature enshrines behaviors as interesting as that of the Anergates atratulus ants, which need another ant species to survive. Here's more about it. Read more »
Link copied!
Interesting Articles
Invertebrates
6 Curious Defense Mechanisms in Insects