Common hippopotamus are graceful in water, good swimmers, and can hold their breath underwater for up to five minutes. 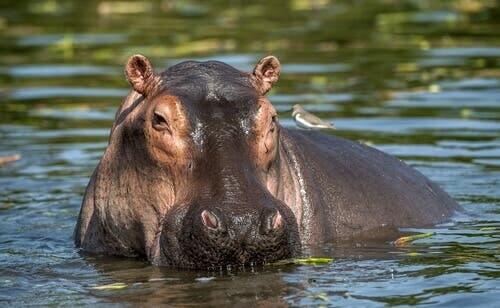 The common hippopotamus is a special mammal and most of us heard about them first at some point during our childhood. Perhaps we’re even part of the lucky ones who have met a real one. Today we’d like to tell you more about this beautiful animal. You’ll learn about their characteristics, habitat, and other things related to them.

Mammals are a large group and the hippopotamus might be one of the great unknowns in this group. To become more familiar with it, we’re going to get as close as possible to this fascinating animal.

Hippos are herbivorous mammals. This should be reassuring as their appearance would lead anyone to believe they’d love to eat humans.

It’s a large animal and its mere presence instills fear. Despite being a part of the group of mammals, it’s also known as a placental mammal. This means they fully develop in their mother’s placenta. They spend a lot of time there because they need to feed on it in order to survive.

The first thing they do after leaving the maternal womb is to go into the water. It’s where they’ll spend a large part of their life, regardless of what they’re doing, be it copulating or giving birth. However, they do it because they like it and because it’s great for their skin. In addition, this animal can live on both land and water.

In regard to physical characteristics, let’s highlight its large size, wide legs, and weight. They can reach between 1.5 and 3 tons. Their skin is dry, rough, and hairless, and so keeping it moist is important for keeping it hydrated and avoiding burns.

Habitat of the common hippopotamus

Africa is its main habitat – more specifically, the sub-Saharan area. Even so, certain specimens are also seen in Black Africa and eastern countries away from the Mediterranean. So, why has the hippo chosen this place as its habitat? Simply because they have what they need there: water and heat.

Hippos are territorial, and we’ll always see them in groups. They’ll defecate to mark their territory and move them around with their tail to extend it. In addition, they move in groups of five to 30, of which the majority are the females chosen as mothers of the males’ future offspring.

Nobody knows for sure how they select them but some are left behind. There are times when territorial struggles arise between them, but these end as soon as it’s clear that one is stronger than the other.

Even though many people think of hippos as cute because they’re not carnivorous, researchers define them as the most dangerous animal in Africa.

Witnesses have seen on many occasions how these animals kill others simply because their presence bothered them. Humans are no exception. Therefore, be careful if you decide to explore the place where hippos live.

The life of a hippopotamus is basically nocturnal, as this is a way to protect themselves from the sun that cracks and wrinkles their skin. They tend to go ashore and look for food when the sun goes down. Their diet is mainly based on herbs and shrubs and they sometimes walk up to five miles to find them.

This is all we’re going to say today about this fascinating animal. We’re sure you’ll agree they’re really worth knowing even though they live so far away from us. Some say that a love for animals increases our love for one another, and we’re sure you’ll love them more now that you know more about them. Nature definitely never ceases to amaze us.

How Do Animals Sweat?
Almost all animals sweat, but how they sweat varies between species. Some sweat through their paws, some through their noses. It all depends on the glands. Read more »
Link copied!
Interesting Articles
Invertebrates
All About the Destructive Power of Termites