Discover 5 Animals that Live in Alaska

These animals that live in Alaska are eye-catching due to their big size. They’ve adapted to the harsh conditions of oceanic and polar climates. 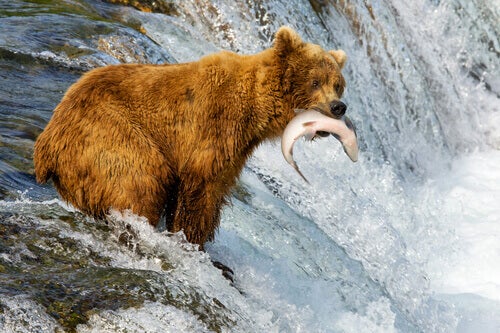 Impressive animals live in the mountains, taiga forests, frozen lakes, and around the volcanoes that erupt from time to time in Alaska. In this article, we’ll tell you all about some of the animals that live in Alaska.

What are the animals that live in Alaska?

With a marked oceanic and polar climate, the cold in Alaska really makes itself felt, although it’s also true that the temperatures can be quite pleasant during the summer. The animals that live in Alaska have been able to adapt to these conditions in an amazing way. Below, we’ll tell you about the most representative species.

Although people usually relate this animal to certain national parks in the United States (including Yellowstone), the truth is that most grizzly bears live in Alaska. After the polar and the Kodiak bear, it’s the third biggest of the Ursus family. It can weigh up to 1212 pounds and measure more than six feet when standing.

Like its other relatives, this brown bear subspecies has a hump on its back, which enhances the strength of its front legs. Grizzly bears eat the following foods: bark, fruit, roots, insects, worms, vegetables, big prey (for example, deer or reindeer), and salmon and sea bass.

This is one of the animals that may come to your mind when you think of Alaska. It’s the biggest of the deer family. It can measure up to 10 feet long and 6.5 feet high. This animal inhabits Nordic forests.

It has adapted to cold climates in a remarkable way. Its nose is especially big to warm the air flow before it enters the lungs and its legs are long to prevent its belly from coming into contact with the snow when walking. Nature is definitely very wise!

Male moose have very big, striking antlers, with several tips. In addition, it has a kind of “flap” in the chin (dewlap) that makes it look even stronger and more powerful. However, this animal only uses its antlers to spar over the right to mate with a female during the mating season. In fact, when faced with danger, it chooses to run away.

Big, and with fur that ranges from black to whitish-gray (which it sheds after the winter), the Northwestern wolf also belongs to the group of animals that live in Alaska, very close to the Arctic Ocean.

Adult males measure up to 33 inches and weigh up to 143 pounds. They group in herds with the females and young to hunt elk and deer. The technique they use is the following: the leader of the group takes the mortal bite. After it feeds, it allows the others to do so.

It’s one of the biggest fin whales, measuring up to 52 feet and weighing up to 30 tons. Although it’s found in oceans and seas all around the world, in Alaska people can see it during the summer when it travels to feed on krill and small fish.

In order to spot this huge animal, you can take boat trips through Prince Williams Sound or Kenal Fjords National Park. Sometimes, people only get a glimpse of its big tail. However, if they’re lucky, they may see it jumping out of the water!

This animal, which the Founding Fathers of the United States selected as its emblem, also lives in Alaska. It has black feathers all over its body except for the head and tail, which are white. Its beak is yellow.

This bird can stay still for long periods of time. Although it may seem like it isn’t doing anything, it’s actually trying to find food. Its diet is based on fish such as salmon or trout. However, it can also feed on carrion.

The bald eagle is also the North American bird that builds the biggest nests: 14 feet high by six feet wide. It can build them either in the ground, trees, or rocks near cliffs, as long as they’re near water. Both parents take care of the chicks until they can fend for themselves.

Animals that Adapted to Extreme Cold
For some animals, low temperatures and snow are part of their normal lives. Up next, we'll tell you all about animals that adapted to extreme cold weather. Read more »
Link copied!
Interesting Articles
Invertebrates
5 Interesting Facts about Soldier Ants