Yellowstone National Park is the home of species that were once endangered. Several big mammals coexist in this 2,220,000-acre park. 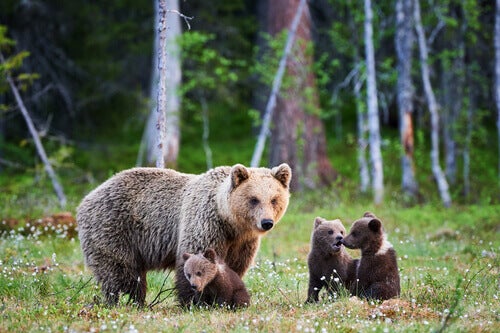 Yellowstone National Park was the first area to be declared a natural park. Today, it’s still considered one of the most important ecosystems in the world. This park saved species that were once endangered and also made others, such as the big mammals that live there, more widely-known.

The ecosystems of the mammals of Yellowstone National Park

This amazing park is located in the United States. Although most of it is located in the state of Wyoming, it also borders Montana and Idaho. It spans an area of about 2,220,000 acres, and hundreds of different animals and plants live there.

Many different types of ecosystems coexist in this park. In fact, almost the entire park is subalpine forest. However there are also wetlands, lakes, and flat meadows. This park’s geothermal activity is unique on the planet, as it contains active volcanoes and geysers.

As it’s a protected natural park, hunting has been prohibited inside it for more than 150 years. Thanks to this measure, experts have been able to study how species develop and recover when they aren’t threatened and how others that were endangered no longer are.

Grizzly bears, featured in this article’s main image, is one of the park’s greatest sources of pride, as they were considered to be endangered. Thanks to this park, they no longer are. In 1975, there were only about 200 grizzly bear specimens. Today, the population is believed to be more than 500.

The grizzly bear is one of the big mammal species of Yellowstone National Park. In addition, it’s one of the biggest species of brown bear. They can weigh up to 1100 pounds. As for their height, they have an average shoulder height of 3.35 feet and a hindfoot length of 11 inches. However, when they stand on their legs, they can reach a height of eight feet.

These bears are solitary animals, except in the salmon spawning season, when numerous groups gather in rivers to fish. They’re omnivores, since they can also feed on fruits, grass, and many other vegetables.

Only two species of bison remain in the world: the European, which has been hunted and currently only lives in small areas of Eastern Europe, and the American. The latter have survived thanks to the protection this natural park grants them. In fact, experts are currently trying to reintroduce it in Mexico.

The American bison is over nine feet long. In terms of weight, it ranges from 1470 to 4270 pounds. It’s brown, and its winter coat is a shade darker than its summer coat.

Bison are herbivorous animals that live in groups on plains, meadows, and riverbanks. They mostly eat the grass and reeds in humid areas, and, thanks to their size, have few predators.

The elk, also known as wapiti, is one of the biggest deer species in the world, second only to moose. People often confuse this animal with moose, although there are several notable differences between both species.

Elk are very tall animals: they measure more than three feet to the withers and weigh between 550 and 1000 pounds. The males are notably bigger than the females. Furthermore, only the males have horns, as well as a dense mane on their necks.

The elk has a dark brown head, neck, and legs, while the body is lighter. The coat is usually darker in the winter than in summer. The hindquarters have a white circle.

Elk are also herbivores and ruminant animals. They live in large herds separated by sex, since this is the only way they can defend themselves against predators, such as the wolf.

One of the most famous wildlife conservation stories of recent years was the reintroduction of the wolf to Yellowstone National Park. These canids were hunted to eradication in this area of ​​North America before it was declared a national park.

In the late 1990s, experts implemented a plan to reintroduce wolves to this national park. The return of this animal represented a very big change in the food chain and, therefore, in the entire park. Experts observed that wolves changed the flow of the rivers and slowed soil erosion.

North American wolves are bigger than Iberian wolves. They weigh up to 155 pounds and have a height of about 35 inches to their withers. They’re very intelligent carnivores that come up with hunting strategies as a group.

Natural parks are big ecosystems where animals can develop without external threats. Yellowstone National Park is an example that shows us that animals can live together in the wild and that endangered species can be saved.

Tips for Visiting a National Park
If you're interested in visiting a national park, there are few things you need to know. In this article, we'll give you tips for your trip. Read more »
Link copied!
Interesting Articles
Mammals
All About Badgers: Characteristics, Habitat and Behavior