Harris's Hawk: The Wolves of the Air

This raptor is easy to train, so it's used to scare off pigeons or sparrows in places like airports. In the wild, contrary to the usual, these birds hunt in groups, as they corner their prey, which increases their chances of success. 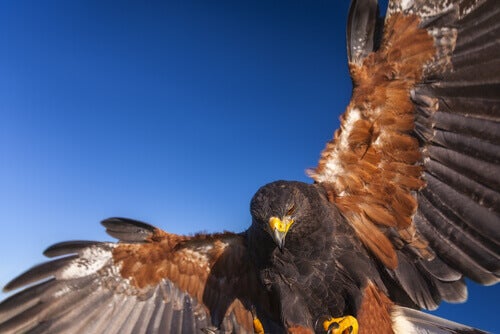 The Harris’s hawk, also known as the bay-winged hawk or dusky hawk (Parabuteo unicinctus), is a medium-sized bird of prey, well known for its unique behavior and popularity in falconry.

Traits of the Harris’s hawk

This medium-sized bird of prey is reminiscent, in some respects, of the common buzzard, widespread in Europe. However, it’s an American bird with dark brown plumage and whitish tones, as well as yellowish claws and beak.

Its habitat covers the sub-desert areas in the south and center of the American continent, which makes their nests compact and dry, often located in cactuses. Females build the nests and they lay bluish-white eggs with spots.

This bird has a very curious breeding behavior, and it’s common for two males to look after the same nest. This conduct is in opposition to many species’ behavior in which competition between males can lead to infanticide.

The hatchlings leave the egg after one month, and begin to fly after 50 days. Normally, the young stay with their parents for up to 3 years, and then help raise new chicks. Coyotes and other larger birds of prey tend to ravage the nests of the Harris’s hawk.

The Harris’s hawk is unique among birds of prey. While the vast majority of these aerial predators are solitary, the bay-winged hawk hunts in small kettles of two to six individuals.

Scientists believe that group hunting is an adaptive behavior to the scarcity of food in desert climates where it lives. This increases its range of prey, allowing it to hunt adult hares and other species, which, for a bird of its size, would be impossible without collaboration.

These hawks have various techniques. What they usually do is advance through the territory and, while some scare the prey away, others catch it. Hunting in groups allows them to set up ambushes or take prey out of their hiding place, while they cover other exits. This way, these birds increase their hunting success.

Man’s relationship with the Harris’s hawk

As already mentioned, its use in falconry is widespread. However, its history in this practice is relatively recent, and is mainly due to being easy to train.

In fact, these birds of prey are most often used to scare away sparrows, pigeons and other birds from airports or public places, and even to take down drones.

Harris’s hawks are used to hunt hares and other animals, in addition to performing in shows. Unfortunately, as it’s usually the first bird people acquire to train, it’s common for them to escape. And, in fact, it’s one of the most common invasive species in some countries.

However, with the right discipline and knowledge, it’s easy to train this bird. They can learn to come to the glove on our signal, and even perform some tricks. Finally, the abilities of Harris’s hawks make them formidable flying companions. They’re skilled hunters and great ambassadors of their wild congeners.

Discover the Condor, a Majestic Bird
Discover the condor here. It's one of the biggest birds in the world and they're a threatened species because of their low reproduction rates. Read more »
Link copied!
Interesting Articles
Birds
The Effects of Climate Change and Plastic Pollution on Seabirds

Birds
All About the European Kestrel

The European kestrel is a daytime bird of prey similar to the eagle. It’s easy to see mainly in peninsular…