These marine species use the caudal or tail fin to propel themselves. These fins can have different shapes. 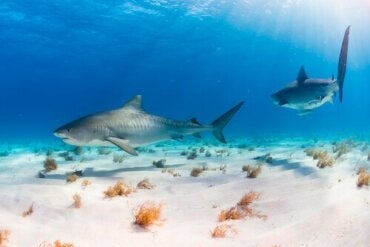 The caudal fin is one of the many fins that a marine animal has, but it’s the one that draws our attention the most, perhaps due to its movement, shape, and color. In this article, we’ll tell you about the different types of fish tail fin.

The word “caudal”, which is used to refer to fish tail fins, comes from Latin. It means “tail” and is located at the end of the body. Animals use it as a means of propulsion.

From sharks that move their tail fin sideways, to veiltails that have “webs” or “veils” allowing them to move freely in water, there are different types of fish tail fins:

In this case, the vertebrae extend into the lobe of the tail, which is asymmetrical (one part larger or longer than the other). We can find two subtypes of heterocercal tail. The first subtype is the epicercal, when the upper lobe is longer than the lower one, as is the sharks’ tail (see the photo at the beginning of the article). The second subtype is the hypocercal, when the lower lobe is longer, for example, in the tail of flying fish.

In this case, the tail extends around the vertebral column, and is commonly seen in fish embryos. The vertebrae continue up to the tip of the tail, which is symmetrical but not expanded. This type of tail is also found in fish such as lancelets. They’re similar to eels but smaller, inhabiting coastal waters around the world.

3. Homocercal: the most common type of fish tail fin

It’s the most common among fish tails and is symmetrical, because the vertebrae don’t extend towards any of the two lobes in particular. Among the homocercal tails we can find different shapes or terminations: rounded, truncated (with two rounded edges), forked (ending in two tips), convex (ends with a slight inward tip) and lunate.

In this case, the vertebrae extend towards the tip of the tail, which is symmetrical and expanded. It’s common in the families of lampreys, lungfish, bichirs, and coelacanths. It was also the type of tail that Paleozoic fishes had.

Moreover, its shape is curious, as it ends in a small pointed tip in most cases. It’s preceded by a rounded part, which is part of the very body of the animal.

This is undoubtedly a “familiar” tail displayed by a well-known fish. The goldfish or veiltail fish is present in hundreds of ponds and aquariums around the world. This species, originally from Japan, draws attention because of the kind of webs that emerge from its body, not only from the tail, but also from its belly and back.

The veil tail is very light and moves quickly. So, this allows the fish to move from one side to the other without any problems. Large in size, in some cases larger than the body itself, the tail makes it possible to determine whether a fish is male or female.

Even if the predominant color of the veil is orange, there are also other shades such as pink, white, and blue. It doesn’t always have the same color as the body. For those who have a fish tank at home, you should know that the tail of a veiltail is very delicate and prone to fungus, which appears due to the accumulation of dirt and bacteria. When it’s sick, the tail changes color and is no longer bright.

Are There Scaleless Fish?
Scaleless fish inhabit many places of the planet: rivers, lakes and seas. Here are some types of scaleless fish and their characteristics. Read more »
Link copied! Next
Interesting Articles
Fish
Different Types of Water for Your Fish Tank