What size tank do goldfish need? That's a question that often gets different answers. So, we wanted to dedicate this article to talking about the most important factors when choosing tank size. 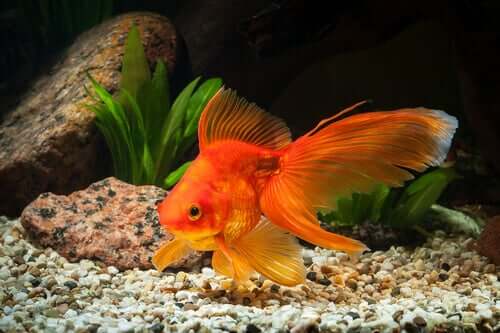 Goldfish (Carassius auratus) suffers more than most fish. This has a lot to do with many false ideas about them, and the unfortunate lack of information on how to properly care for them. Many people keep them in small fish bowls, but never think that goldfish may need a big tank.

Apparently, goldfish are actually very social creatures. They have a strong character, too, which they frequently display with their interesting behavior. Today, we’re going to talk about how big a goldfish tank should ideally be.

How can you figure out what size tank your goldfish needs?

Many people will say that 25 gallons of water is a minimum volume for a goldfish. They’ll also list a varying amount of extra water for each additional fish.

But that volume actually isn’t good enough. It won’t be a big enough tank for your goldfish. The average size of a 25-gallon tank is about 36 x 14 x 12 inches.

The best rule to go by is “six times the length” when it comes to goldfish. That proportion will give them both a good depth and a good total volume of water.

It’s also worth pointing out that the fish size you need to be thinking about is the maximum size an adult goldfish can reach. You shouldn’t be thinking about how big it was the day you bought it as a young fish.

The difference between common goldfish and comet goldfish

Many people will also talk about the different sizes of tank you need for a common goldfish, versus a comet goldfish. The common goldfish has just one back fin (tail), and a long body. This is the more “traditional” form of goldfish.

Comet goldfish, on the other hand, have been bred to develop more specific body shapes. They tend to have a double back fin.

There are some other differences, too. Comet goldfish tend to have much larger heads and also have huge eyes. They also tend to have a much rounder, more compact body.

The size of an adult goldfish

A pretend goldfish that has completely developed into adulthood can easily reach a size of 12 inches long and 12 inches wide, including fins and tail. Adult goldfish will reach the size of a grapefruit, and weigh about a pound.

The varieties of goldfish with shorter fins may be shorter overall, but still have large, voluminous bodies. With that in mind, you can see how a 25-gallon tank with 36 x 14 x 12 inch dimensions would hardly be enough space for it to swim around in.

A common goldfish can also grow to bigger sizes than what we mentioned above. This is especially true for goldfish with longer fins, like comet goldfish.

How to know if goldfish need a big tank

Let’s take a look at some of the things you need to keep in mind when it comes to the best size for a goldfish tank.

Comet goldfish tend to have some problems swimming. Because of the genetic modifications they’ve undergone, they have long fins, rounded bodies, a disproportionate head, poor vision (just look at those giant eyes!), and a compact body shape that keeps them from swimming properly.

Because they’re not very agile, they need a lot of space to work with so that they can turn around. Even though they’re not fast swimmers, they still need lots of space to move around in. Common goldfish are much faster and more agile than comet goldfish.

The water’s surface is where the gas exchanges happen. This means that the bigger the area of the surface, the more space there is for oxygen to come in and carbon dioxide to come out. That’s important for goldfish because they need a lot of oxygen in the water. In other words, a large surface is better for them.

Many goldfish have respiratory problems because of underdeveloped gills. This is why it’s so vital for them to have a well-oxygenated tank.

In general, the bigger the fish, the more waste it will produce. The waste excreted by fish is known as “organic matter.” A fish that produces a lot of that will need a much bigger body of water, and much bigger filters in order to keep the water clean.

Both common and comet goldfish can easily live up to 25 years. The more elegant varieties of goldfish should be able to make it to somewhere between 10-15. Think about that. That’s a long time. It wouldn’t be at all pleasant to have to spend so many years in a small environment with nothing to interact with.

This is yet another reason that goldfish need a large tank. It should be big enough for there to be environmental enrichment, and things to do (decoration to play with, plants to swim around and eat…). This will help keep them stimulated for many years.

What size tank do goldfish need?

Goldfish don’t need a ridiculously big tank. Something like 48 x 20 x 20 inches is the minimum for the goldfish we talked about before. The larger common goldfish we mentioned should have a tank no smaller than 80 x 24 x 24 inches. Goldfish should ideally live in open-air tanks, and not aquariums.

Those sizes will give them a reasonable amount of water to live in. They’ll have space to move around well, you’ll be able to add decorations, and even include some other fish friends that will show you the huge range of goldfish behavior. They won’t feel stressed, trapped, or alone.

Remember: goldfish grow quickly if you keep them in proper conditions. 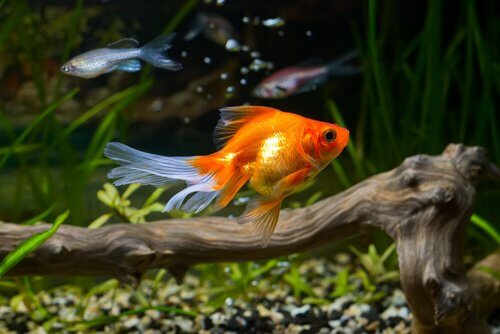 Caring For a Goldfish and Potential Diseases
If you're considering getting an aquarium, you should get more information about caring for a goldfish. Read on for more! Read more »
Interesting Articles 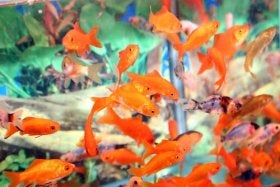 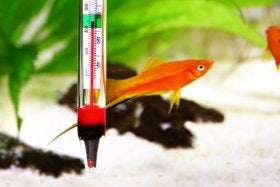 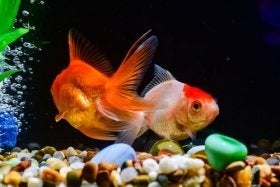 There are many fish species in the world. Each requires a specific diet, in which the temperature and climate also play a role. When it comes to fish food, it’s essential that what you feed your fish meets the nutritional…