Our seas and oceans are home to some of the most fascinating creatures on our planet. So, today, we're going to tell you some interesting facts about fish. 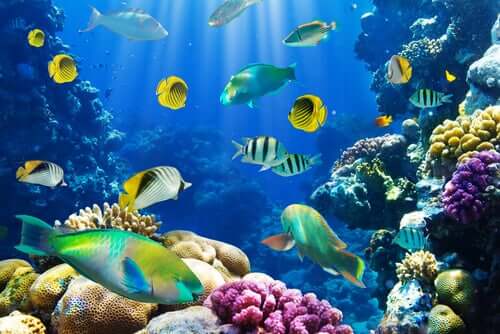 Whoever said fish were boring animals? In this article, we’ll tell you 6 interesting facts about fish that might just change your mind.

Many people know very little about the creatures that inhabit our seas, lakes, and rivers. So today, we want to tell you some of the most interesting things about fish, so you can get to know them a little better.

While many fish have swim bladders that inflate with air to allow them to maintain a stable depth in the water without sinking to the seafloor or floating up to the surface, other fish aren’t so lucky. This includes species such as the stingray and sharks. They have to keep swimming even when they’re asleep. If not, they’ll sink.

Nobody knows exactly where the myth that goldfish have a terrible memory has come from. The fact is, it’s not actually true. According to several studies, these animals have the ability to retain information for up to 5 months. But how did they actually test this?

In captivity, they trained a group of fish to respond to certain sounds. They were then released into the wild and, after a few months, the scientists played them the same sounds again. To their surprise, the fish remembered and reacted to the sounds.

3. They don’t have outer ears or eyelids

Have you ever wondered how fish hear if they don’t have ears? Well, they do actually have an organ that functions as an inner ear. Though you can’t see it, it allows them to perceive sound and vibrations in the water. It’s also worth noting that the noise caused by people can have a huge effect on fish. In some cases, it can cause extreme stress and interfere with their natural behavior, such as feeding, growth, and reproduction.

Another interesting fact about fish is they don’t have eyelids. But just because they can’t close their eyes, doesn’t mean they can’t sleep. Most of them stop swimming when they’re tired, and find a rock or cave where they can rest. Despite having their eyes open at all times, they can still get plenty of sleep.

In the Caribbean Sea, the Pacific Ocean, and off the Coast of Florida (US), you can find the stonefish. It’s the most venomous fish in the Synanceiidae family. Its sting can kill an adult human. The stonefish gets its name from its ability to camouflage itself among the rocks on the seafloor. It doesn’t usually attack unless it feels threatened. The problem is that the stonefish poses a danger to anyone that walks nearby. To neutralize the poison, you need to submerge the wound in hot water.

Other poisonous fish include those of the Pterois genus, which live in the Indo-Pacific Ocean. They have pectoral fins and a dorsal fin that they use as a stinger, and can camouflage themselves amongst rocks and seaweed. The good news is that their sting isn’t fatal to people, although it can be extremely painful.

5. Determining the age of fish

This information is often required by fishermen, as well as scientists. But how do you tell how old a fish is? Experts use a technique known as otolith reading, which is similar to looking at the rings on a tree. The small bones that make up a fish’s inner ear are composed of concentric layers that mark how many years it’s lived. Scientists are also working on developing another method, but, so far, it has proved less accurate.

The pufferfish has the ability to inflate like a ball or balloon to reveal large protruding spines. They do this to look bigger and more dangerous than they really are. To do this, they suck in lots of water and store it in their stomachs. If taken out of the sea, they can inflate their stomachs with air instead.

The seahorse is the only animal where the male is responsible for giving birth to the young. After mating, the female passes the eggs to her partner, and he carries them in the womb for 45 days. After that, they can mate again.

All About Ichthyology: The Study of Fish
Today we're going to tell you all about ichthyology,which is the study of fish, their biology, classification, and distribution. Read more »
Link copied!
Interesting Articles
Fish
Different Types of Water for Your Fish Tank