These species use their gliding ability to soar at a high speed that helps them elude predators. Learn about flying fish in this article. 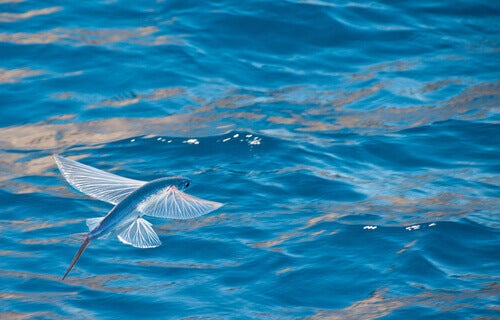 When we think about animals that fly, birds are the first ones that come to our minds. However, have you ever heard about flying fish? As their name suggests, they can move their fins out of the water and travel several feet. Learn more about them in this article.

All about flying fish

Their scientific name is exoketids but they’re commonly known as flying fish. Although they seem very rare or exotic, the truth is that there are more than 70 species within this family and they live in tropical and warm waters.

The main characteristic that differentiates them from other fish is the large size of their pectoral fins. In some cases, they can measure half the length of their bodies and they allow them to glide and fly for distances of up to 165 feet, and they can stay in the air for up to 45 seconds. In addition, they can reach speeds of 37 miles per hour and their fins can flap about 50 times per second.

Some species of flying fish have four large fins (in addition to their pectorals and pelvic fins) that help to move faster. They use this technique to effectively escape from predators.

Their bodies are covered with large, smooth scales. This helps them stay light and allows them to fly without any problems. In most cases, these fish are brown, white, or gray in color, and their fins can be silver or white.

How do flying fish fly?

If we take into account that these fish are 12 inches long, their ability to ‘fly’ is more than just being able to jump out of the water, as salmon do.

Their process of flying or gliding starts underwater: the fish swims at a high speed and then jumps to the surface, as if it were a plane about to take off. Then, while its tail is still in contact with the water, it begins to move its wings very quickly. This helps it avoid ‘falling’ and it helps support its belly.

They definitely put on quite a show when they do this by leaving a trail in the water and showing off their skills. In fact, if you go to a Caribbean beach in the summer, you’re likely to see their techniques and style ‘live.’ They always take advantage of the air currents to help themselves move with the least amount of effort.

Their physiognomy and abilities have evolved over time to help them avoid being caught by predators. Their most common predators are raptors, who capture them in flight using their sharp claws.

They’re also called ‘swallow fish’ and they have flatter eyes than other sea inhabitants. This helps them see out of water. Also, they prefer to live near the surface and their main food is plankton, just like whales. They mainly live in the Caribbean, the Antilles and Latin America. However, they can also live in the Mediterranean and Asia.

Find Out All You Need to Know about Blowfish
Known for their ability to inflate in the face of danger, famous in Japanese cuisine; learn everything you need to know about blowfish here. Read more »
Link copied!
Interesting Articles
Fish
Different Types of Water for Your Fish Tank