Find Out All You Need to Know about Blowfish

They’re the second most venomous animal in the world and there's no cure for their deadly poison. Above all they're known for their ability to inflate themselves and for the spines many species possess. Find out everything you need to know about blowfish here. 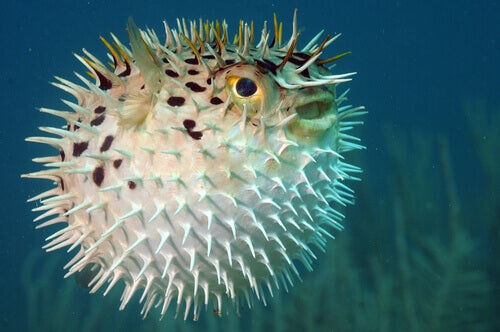 Famous in Japanese gastronomy, known for their ability to inflate in the face of danger; they’re one of the many inhabitants of the oceans that capture the imagination. Learn everything you need to know about blowfish in this article.

All you need to know about blowfish

Also known as pufferfish, these fish live in oceans and estuaries near the tropics. Medium sized – no more than 50 centimeters (20 inches) long – they can live at depths of up to 1000 feet, especially in areas with coral reefs.

Their most distinctive trait is the ability to swell up when scared or attacked. They do this by gulping down a large amount of water in a very short time. This hugely increases their size. In this way they seem more dangerous, and they’re more difficult for any predators to gobble up.

Research suggests that this famous and intriguing ability developed to counteract the fact that the blowfish swims very slowly. Because they were so vulnerable to attack by larger fish, they developed this curious technique which, up to now, has served them very well.

Even if a predator manages to snag a blowfish in its ‘normal’ state, its success will be short-lived; the blowfish releases its venom instantly and the hunter dies almost immediately.

The blowfish is related to the hedgehog fish, and some species also have spines which are visible only when they’re inflated. Another intriguing characteristic of this animal is that they have four teeth – two above and two below – which allow them to crush the shells of their prey: mollusks and crustaceans.

There are about 120 different species of blowfish in the world, most of which aren’t threatened or endangered. However, in some areas where they live, pollution, overfishing and coral loss are taking their toll on populations.

After the golden frog, the blowfish is the second most poisonous vertebrate animal in the world. Some of their internal organs, such as the liver, ovaries and testicles, as well as their skin, are highly toxic, more so even than cyanide. However, until now scientists haven’t found any antidote to this effect.

A person who is poisoned with blowfish venom suffocates but, although the neurotoxin does reduce neuromuscular mobility, no brain functions are altered. This means that as they die they’re completely aware of the situation.

The danger does not prevent the blowfish from being a delicacy enjoyed by many. In fact, in countries like Japan, China and Korea – where they have various different names – they’re a very coveted and expensive dish, enjoyed by both locals and tourists every day.

A chef who prepares blowfish needs a special government license. In addition, they need experience to know which parts of the fish can be consumed and in what amounts. A badly cut portion can kill a customer; even after boiling, roasting or frying, the toxin remains active.

According to legend, dining on this fish was forbidden in Japan for two centuries. This was due to the high number of deaths that resulted. Nowadays, the fishing, consumption, and sale of blowfish is permitted as long as certain strict standards are met. However, they remain banned in restaurants in several countries, including Spain.

There’s still a lot more to get to know about blowfish – they’re fascinating animals!

Fish Reproduction – All You Need to Know
Understanding the type of care that other less common animals require is a bit more complicated. Do you ever wonder how fish reproduction takes place? Read more »
Link copied!
Interesting Articles
Fish
How Water Pollution Affects Fish