The Animals with the Strongest Jaws

The specimens with strong jaws have in common that they would tear a person apart in seconds. There are marine species, reptiles, and mammals. 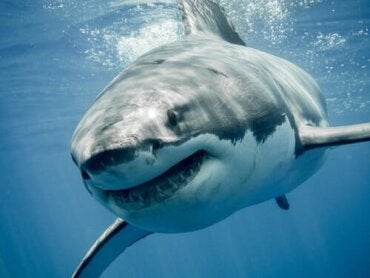 Some animals are known for having powerful, large jaws. Any of these animals could seriously injure a human if they crossed their path. Today, we’ll learn more about the power that animals with the strongest jaws exert.

The strongest jaws of the animal kingdom

The Earth is full of countless species of animals. Each of them has characteristics that make them unique and special. In this article, we’ll focus on one of the aspects that arouses the most fear and interest in humans: the strongest jaws of the animal kingdom.

Larger animals, such as sharks and crocodiles, clearly fit into this classification. However, there are also animals that are much smaller, but still possess a very powerful bite that is capable of seriously injuring any human being.

The marine crocodile is considered one of the most ferocious and dangerous animals in the world. According to various studies, this animal has the strongest jaw. Their jaw is by far the most powerful since it has a proven capacity of 7,700 pounds per square inch (psi).

Experts have observed marine crocodiles hunting other powerful, large animals, such as sharks and buffaloes. Authorities have also reported numerous fatal attacks on people in Australia. In conclusion, this animal is the absolute winner of the strongest jaw of all known animal species.

In second place, we have the Nile crocodile. This variety of crocodile has a bite of 5,000 psi. They’re also one of the most aggressive and dangerous species in the world.

Unfortunately, contact between humans and these animals has often ended in fatal outcomes. With such a powerful bite, this crocodile is able to practically split a human of medium size and weight in half.

The Great White shark, as surprising as it might seem, isn’t the animal with the strongest jaw. In fact, they only have a force of 670 psi.

This animal is a well-known character from horror movies. For this reason, many people would naturally include this animal in the list of animals with the strongest jaws. They also have serrated teeth that represent power and significant danger for any species that cross their path.

Killer whales, also known as orcas, are another animal that has one of the strongest jaws. Their powerful bite makes victims tremble. This species, which belongs to the dolphin family, can have a maximum bite force of 4,000 psi.

More animals with the strongest jaws

Reptiles are, in short, a great example of animals with large jaws. In fact, the American alligator, despite not being as large as other species in their family, has a bite of 1,120 psi.

The king of the jungle has to be on the list of animals with the strongest jaws. This mammal has a force of 690 psi.

Lions are one of the most feared predators in the jungle and it’s not hard to understand why.

Many people have a keen interest in polar bears. Without a doubt, they’re one of the most adorable and interesting animals. However, it’s also one of the fiercest species in the world.

Polar bears are capable of hunting animals that are considerably larger than them. They have a bite of 1,230 psi.

The bull shark is perhaps one of the most aggressive animals. In fact, every year bull sharks attack humans more than even the powerful and feared Great White shark.

Few people would imagine that a turtle would be on the list of animals with the strongest jaws. However, the alligator snapping turtle can bite off a person’s finger with relative ease. In fact, the bite of this animal is actually more powerful than the Great White shark’s bite.

Whether you’re dealing with a Nile crocodile, Great White shark, or the Alligator turtle, it’s best to keep a safe distance from these animals. With their powerful jaws, they’re capable of causing great damage to any living being that crosses their path.