The Symbiosis Between Coral Reefs and Microscopic Algae

There are many examples of symbiosis in nature that we're not even aware of. For instance, the association between dinoflagellates and corals is key to the formation of the amazing coral reefs and microscopic algae that cover many surfaces of the seabed. 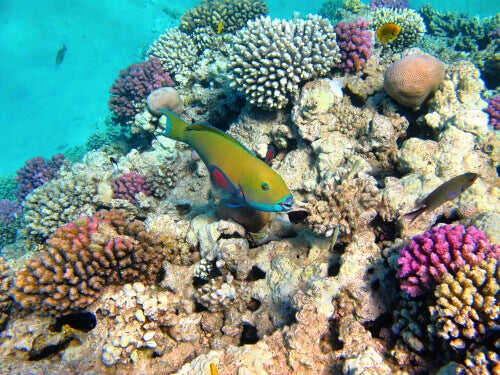 Coral reefs and microscopic algae are among the most diverse ecosystems on Earth. In fact, the Great Barrier Reef in Australia is considered the largest living organism in the world (1429 miles long) and over 1,800 different species inhabit it.

But did you know these reefs thrive thanks to the symbiosis they establish with a genus of unicellular algae?

Today’s article will tell you how these wonderful structures, built by corals, can last for thousands of years.

The symbiosis between coral reefs and microscopic algae

In nature, it’s common for two organisms of different species to established relationships between them. This bond is known as symbiosis and can last throughout their entire life.

There are various types of symbiotic relationships, depending on how it occurs:

In the case of mutualistic symbiosis, organisms interact with each other to benefit one another. This is the term that most pertains to what we’re about to tell you below.

One of the best-known examples of mutualistic symbiosis is the marine ecosystem established by the corals with photosynthetic dinoflagellate algae. OK, but what exactly are corals?

What are coral reefs?

Coral reefs are gigantic marine structures that form from the skeletons of organisms known as corals. Each individual coral is a polyp, an animal, which hangs out with others to form these colonies.

Polyps belong to the same family as jellyfish and anemones. They have a soft, cup-shaped body, from the end of which tentacles come out, as with jellyfish. However, these animals spend their lives attached to a substrate (such as the seabed), so they don’t have the ability to move.

It’s also important to know that not all participate in the formation of reefs and that there are some loners who anchor themselves to various surfaces. These are very striking due to their shapes and colors. They resemble trees and this is why they’re often confused with plants.

Furthermore, these invertebrate animals belong to the phylum Cnidarians and have characteristic gelatinous shapes and sharp tentacles that they use for hunting their prey.

Polyps generate a hard exoskeleton from the seawater and use it to protect their soft bodies. In fact, they inhabit the exoskeletons of their ancestors and simultaneously secrete their own.

These animals multiply and form colonies that operate as an individual organism. Thus, a reef can grow for years and get to be thousands of miles long.

These organisms often use their tentacles to obtain food such as zooplankton. However, they obtain most of the nutrients through microalgae, with which they establish a relationship of mutualistic symbiosis.

They also have symbiotic associations with other living things such as crabs, worms, sponges, and octopuses.

These microalgae of the genus Symbiodinium, commonly known as zooxanthellae, are the cause of the evolutionary success of coral reefs.

Dinoflagellates are one of the most important eukaryotic microorganisms, as they’re the primary producers of the oceans.

The symbiosis between coral reefs and microscopic algae

Dinoflagellates comprise a group of photosynthetic endosymbiotic algae that provide color and nutrients to corals. At the same time, they inhabit the tissue of the polyps, which offer them protection.

The inorganic waste substances that corals generate are used by photosynthetic dinoflagellates. The algae make nutrients for the corals from said compounds and also from sunlight. Therefore, dinoflagellates promote the growth and development of coral reefs.

This exchange is critical for the coral to form its exoskeleton through the precipitation of calcium carbonate (CaCO3).

The bleaching of coral reefs

Climate change is one of the main concerns for the survival of coral reefs.

This is because the stress and acidification caused in the oceans are due to the increase in the temperature of surface waters. Of course, it negatively impacts corals by inhibiting their growth and by the calcification due to changes in pH.

Thus, the coral-algae symbiosis destabilizes and leads to the loss of the algae’s photopigments. It results in the loss of color of the coral tissue. Scientists refer to this as “the bleaching of corals.”

This phenomenon seriously affects the health of the polyps and climate change leads to the death of many colonies and the degradation of their reefs.

As you can see, coral reefs are one of the most amazing natural structures. However, corals would be nothing if it weren’t for the many species that inhabit them and ensure their survival.

The association between corals and algae is crucial for the creation of these megastructures, as is the sunlight reaching their surfaces.

Once again you can appreciate the harmful impact of human action in nature. In this case, it leads to the decline of the ecosystems on the coral reefs.

Thus, you must be aware of this damage and do your best to cut down on global emissions in order to protect and preserve all living beings.

The Seahorse: Hippocampus of the Sea
What do you know about the seahorse? These unique creatures are actually very different from almost all other species of fish. Read on for more! Read more »
Link copied!
Interesting Articles
Birds
The Bali Myna: A Beautiful Critically Endangered Bird