Animals that Live in the Deep Sea

These species have some very special characteristics due to the fact that they receive no sunlight. . They can look monstrous, with huge eyes and teeth, and some species are even capable generating light through bioluminescence. 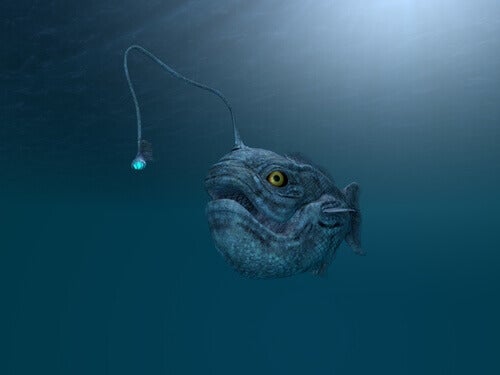 The ocean is the least explored place on the planet, and in its depths is a wide variety of species that we know very little about. Today, we’ll show you a little of what we do know about the animals that live in the deep sea.

The ocean is huge. In fact, three-quarters of the planet is covered with water and it’s calculated that we only really know about 5% of it. This is because these places are difficult to reach, and only highly trained scientists with special equipment can get there.

Technically speaking, the deep sea (or abyssal zone) are the depths of the ocean between about 13,000 and 19,500 feet deep. Light cannot reach this far down and the temperatures oscillate around 35 degrees Fahrenheit.

There are places deeper than the abyssal zone, such as the oceanic trenches, which can reach up to 7.5 miles deep. They’re especially deep places where two tectonic plates converge, and they’re very unusual places that are home to their own fauna.

Characteristics of animals that live in the deep sea

The animals that appear in the deep sea are highly varied and come from many different families. However, the harsh living conditions so deep in the ocean mean that they have certain characteristics in common.

The lack of sunlight prevents photosynthesis and, therefore, no plant species can grow down there. Most animals at these depths survive by hunting, and those that don’t hunt feed on the animal remains that gradually sink to the bottom.

Many of these animals can look like terrifying monsters. Because of the lack of light, many of them have developed huge strange-looking eyes. Others have developed large mouths and razor-sharp teeth, sometimes larger than the rest of their bodies.

Due to the lack of sunlight, some have developed bioluminescent organs that enable them to create their own light. Some fish have antennas that are specially evolved to attract prey with light, and others illuminate their skin to ward off predators.

Gigantism is common at these depths of the ocean. Some species are absolutely huge compared to other species on the ocean surface. Some fish can reach over six feet long, and some crustaceans can even get to just under two feet in diameter.

This animal lives off the coast of Chile and Peru and is known locally as a ‘frogfish’ (see photo above). It has one of the most terrifying appearances of the animals that live in the deep sea. However, they’re relatively small and the larger females are barely 10 inches long. Their spines are actually very sensitive organs that detect the movement of potential prey.

There are three recognized subspecies of dragonfish. In general, they have an elongated, flat body and can measure between 12 and 16 inches long, although this varies between subspecies.

The most remarkable thing about this fish is not just its length but also the size of its mouth. Their teeth are so sharp and long that some specimens have been found that can’t fully close their mouths!

Giant tube worms are one species affected by gigantism. They’re invertebrates that form groups at the bottom of the Pacific Ocean, and they live inside chitinous tubes next to hydrothermal vents.

They have an extremely slow metabolism, which allows them to live for a long time. In fact, it has been found that they can live for up to two and a half centuries. Some have reached eight feet long, but they normally only grow up to five feet.

They have no digestive system and they nourish themselves with the bacteria that cover their body and helps them to synthesize food. Without this symbiotic relationship, these animals couldn’t survive.

Glass squids are a family of transparent cephalopods, hence the name. They’re also known as glass jellyfish or cranch squids. Some species live on the surface, but there are others that live more than a mile and a half deep.

Within this family, there are great differences in size, with the smallest measuring just over an inch and the largest reaching over six feet in length. They all have similar body shapes, with a round body and short tentacles with suction cups.

Some species are bioluminescent thanks to organs located on the sides of their eyes. They use this to camouflage themselves. In general, their entire body is transparent except for a digestive gland located at the center.

The deep sea is one of the most difficult places to reach on the planet. We know very little about it, but despite being so inhospitable, it’s still able to harbor some truly fascinating animals.

Four of the Most Common Animals of Antarctica
Today we'll tell you about some of the animals of Antarctica. As you may already know, this is the only continent that has no human settlements. Read more »
Link copied!
Interesting Articles
Fish
The Lionfish Invasion: The Mediterranean's New Resident

Fish
The Current Situation of Freshwater Fish in Spain

Although you can confuse saltwater fish with freshwater fish at first glance, they’re very different species. Their bodies have different…

Not all animal centers exhibit animals or keep their inhabitants imprisoned. In fact, there are some recovery centers that house…

Animals
The Great Cetaceans of Our Planet

The great cetaceans of our planet are a group of aquatic mammals formed by some 80 species of varying sizes.…

Animals
Can Dogs Take Medications Made for Humans?

If there's one thing we'll never recommend, it's medicating your dog on your own. Any time you suspect your dog…