Lepidosiren Paradoxa: A Fish with Lungs

It’s not every day that we meet an animal that throws us off as much as Lepidosiren paradoxa does. This fish surprises us with its lung breathing ability. 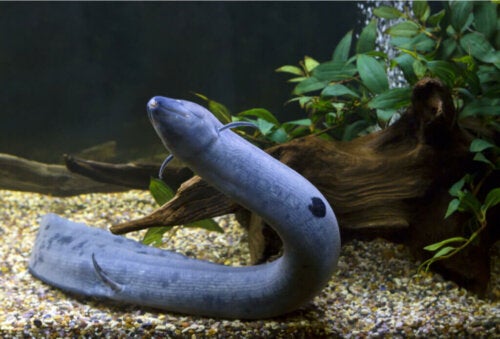 Known by many names —South American lungfish, American mud-fish, piramboia, pirarucu-bóia, caramuru, and scaly salamander fish— Lepidosiren paradoxa is a fish with lungs. It’s unique in its species, and a solitary member of the Lepidosirenidae family. It’s a rather unknown animal from the fauna of the South American subcontinent.

Why is this fish so peculiar? All our lives we knew that animals breathing under water do so through gills, so how is it possible for a fish with lungs to exist? Read on to find out.

Dipnoi is a sub-class of fish closely related to tetrapods —four-legged animals— and among their most typical traits is their pulmonary respiration. Moreover, these beings also possess external nasal orifices.

However, the function of these structures isn’t air breathing —as in other terrestrial vertebrates— but smelling. To capture air, these fish use their mouths and, just as an amphibian would do, take it to their lungs by swallowing it.

Curiosities and traits of Lepidosiren paradoxa

This elusive animal belongs to the group of fish known as “dipnoi”. It’s perhaps one of the most peculiar specimens that we can find in the South American fauna.

Its ability to breathe with lungs has given this animal clear adaptive advantages. The most outstanding of all is that it’s able to survive during the dry season in the watercourses that dry out in the hottest seasons.

What does the fish do when its habitat disappears for a few months? The animal digs tunnels in the mud creating a series of respiratory chambers underground, 30-40 cm (12 to 16 in) away from the surface.

Morphology of this fish with lungs

The juvenile specimens of Lepidosiren paradoxa have golden spots on a black background. In adults, this color changes to become brown or gray with darker spots. The scales that cover them are very small and deeply embedded in the skin.

In any case, all these fins connect to the rest of the body by means of a single bone. This very particular trait differentiates them from many other fish, but brings them closer to terrestrial vertebrates. Another of the many peculiarities of this fish is that the opening of the anus is located on the right side of the body.

The habitat of this fish is usually in stagnant waters where the current is mild or null, generally with abundant vegetation, in rivers and swamps. When their territory dries up due to high temperatures, these animals enter a type of lethargy. Zoologists call this behavior estivation.

During the entire time they stay in this state, they bend over themselves and reduce their metabolism. In addition, they secrete a layer of mucus that seals in the humidity of their air chamber, leaving only two or three small holes to allow for ventilation. This is how these fish survive until the river beds fill up with water again.

With the coming of the rainy season, adults begin to come out of their lethargy to mate. After mating, the future parents build the nest for the young, larvae that will breathe through gills. In fact, these larvae are quite similar to amphibians’ tadpoles.

The male is in charge of guarding the egg-laying. The larvae are born with external gills that degenerate rapidly and transform into a limited internal gill system.

As the environment inside the nest is usually low in oxygen, the parent develops special structures in its pectoral fins with which it releases air. Thus, little by little, the hatchlings develop pulmonary respiration, which begins to be effective from the seventh week of life.

During the juvenile stages, Lepidosiren paradoxa feeds on bottom-dwelling mollusks and crustaceans, along with insect larvae and small fish. As they grow, adults become omnivorous and incorporate algae, herbaceous stems and aquatic plants into their diet. They crush them with their heavy, mineralized teeth.

Is the development of lungs an evolutionary adaptation?

Yes, it is. In general, lungfish have adapted to live in habitats that, throughout the year or part of it, have low concentrations of oxygen. In this way, Lepidosiren paradoxa manages to survive with these low levels of oxygen thanks to lung development. This is why its gill system is very reduced beyond its larval stage.

The pulmonary system of these fish is far from being as sophisticated as that of purely terrestrial animals. For example, it lacks bronchi —those ducts into which the trachea forks to carry air to the lungs. Even so, it’s been helping them survive for years in an otherwise hostile environment.