These cetaceans participate in shows against their will because they receive treats in exchange for tricks or are punished if they don't perform. In captivity, these animals only survive about 6 years, while they can live up to 40 in the wild. 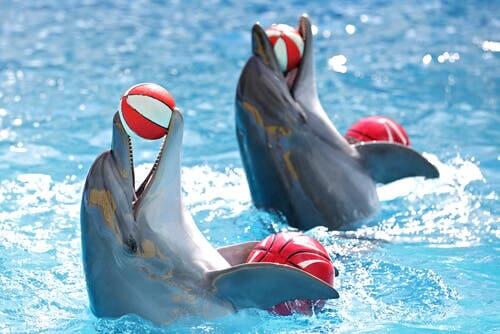 In marine parks around the world, animal shows are the main attraction. What’s behind these shows? What is dolphin training actually like? Do the dolphins suffer or do they have a calm, quiet life? In this article, we’ll try to answer these questions.

Cetaceans are very intelligent animals. In fact, people consider the dolphin to have one of the highest brain capacities in the world. In the wild, these animals learn from their mothers how to communicate with others through sounds, movements, jumps, and tricks.

However, in captivity, for example in a marine zoo, the goal is to show off these “skills” to visitors. Some dolphin trainers say that it is easy to train dolphins because they are social, active, and intelligent animals. These trainers say that for dolphins jumping out of the water or “speaking” is something that comes naturally to them.

The best time to start training is when the dolphins stop feeding on breast milk and can eat solid food (fish). In addition, during this stage, the caregiver or trainer can create a strong bond with the animal.

Trainers can teach the dolphins some exercises in a few days, while others require more time. For example, jumping through hoops or playing with balls take a bit longer. These aren’t common activities in the wild so the dolphin has to learn them from scratch.

If you rely just on the claims of dolphin trainers or marine park owners, you might think that these dolphins have a perfect life there. All they have to do is play for a while, do certain activities, and eat treats when performing in front of the public.

The truth about dolphin training

However, things aren’t quite so idyllic. First, dolphins in captivity only live about six years. In the wild, these animals can reach up to 40 years, as long as they circumvent the dangers of hunting and fishing.

Unlike the animals in the ocean, dolphins captured for use in a marine park or born in captivity live in very small spaces. They live in pools without waves, without fish to catch, and without vegetation.

When you go to a dolphin show, you might think that dolphin training is pure happiness. You can see dolphins jumping and playing. They look happy. However, the reality is that to get dolphins to learn tricks, trainers can be cruel and punish dolphins for not obeying orders. They don’t use physical punishments. Instead, they withhold food. In fact, in some cases, they only feed the dolphins when they perform the task.

If you’ve ever been to a dolphin show, you might have noticed that at the end of the show, the trainer takes a fish out of the bag and gives it to the dolphin. This isn’t just a treat, it’s their food ration. Basically, the animal does the tricks and activities because they are hungry. They know that they will only get food when they perform well.

For these marine animals, these shows are not fun. The dolphins aren’t having a great time. Instead, this is just a way they get food. The trainers have buckets of food and, therefore, they have the power.

If the cetaceans are well fed, they won’t jump, play, or throw the ball. They won’t splash the public, swim up on their tails, or do any of the activities.

The behavior of dolphins in captivity

Regardless of what you believe about dolphin training, we should all bear in mind that animals are not born to be enclosed. Their purpose in life is not for people’s entertainment. If you think about these animals as being happy to be in an area where they are fed and cared for daily, then you’re not taking into account the true implications of their captivity.

As with zoos in general, you can argue that animals have all the necessary comforts and caregivers recreate their natural habitats as much as possible. However, it’s undeniable that zoos will never be better than the animal’s natural environment.

The only exception is reserves or shelters that take in injured, sick, or orphaned animals. However, these places don’t use the animals for show and return the animals to the wild once they are able to survive on their own.

Dolphinariums, Freedom Or Prison Cells?
Dolphinariums are used to contain dolphins and orcas so people can get a close look at them. They may seem happy, but they're actually in a prison cell. Read more »
Link copied!
Interesting Articles
Fish
Different Types of Water for Your Fish Tank